Article by Julian Linden courtesy of the Daily Telegraph.

He first set foot on a snowboard as a three-year-old after his father bought him a display model for $10. That board was not even supposed to be used on the slopes but his family had struggled to find one that was small enough for him.

By the age of 10 he and his mother Celia were spending six months in the US training while his father stayed at home in Australia taking care of James’ three siblings.

Now a veteran of four Olympic Games at the age of just 27, on Friday James secured a silver medal in the halfpipe, adding to the bronze he won last time out in Pyeong-Chang .

James was competing in his fourth Winter Games, after making his debut at the age of just 15 in Vancouver in 2010. The Victorian, who is engaged to Aston Martin Formula 1 heiress Chloe Stroll (pictured bottom right) after popping the question last year, said he was “over the moon” with his achievement, but promised to hunt down the elusive gold medal in four years time after a heartbreaking finish left him agonisingly short in Beijing.

James was on the verge of claiming Australia’s second gold medal of the Games when Japan’s title favourite Ayumu Hirano nailed his final run and the last attempt of the final to snatch top spot on the podium with an epic score of 96 points to just edge ahead of James, who posted 92.50 with his second run.

Despite the obvious heartbreak , Australia’s triple world champion, who is known as the Wizard from Warrandyte, said he was delighted with the silver. “I really hope people don’t think that I’m at all disappointed ,” James said. “I am absolutely over the moon and I came out, gave it my best shot, that’s all we can ask for as athletes.

“I work really hard, it’s been an incredible journey and to stand on the podium at the Olympic Games is an incredible feat. I don’t have too many words for it right now, honestly, I’m absolutely thrilled.” But James admitted he did not watch Hirano’s final run, saying: “I never do.”

Instead he stuck in his ear pods to listen to some rap music. He reserved lavish praise for Hirano, his fierce rival who had come so close to gold twice before, but promised to fight on for the next Winter Olympics in Milan in 2026. “( Ayumu) is an incredible rider and I look forward to having many many healthy battles with him in the future,” James said. “I am proud of him but I am ready to fire up and answer back when I can. If I can display that and ride like that and just pour my heart into what I’m doing then I’ve had success.

“I’m still really young, I still have a lot of vision. I’m very driven, and I made the joke before that I’ve got the bronze, I’ve got the silver, and now I need to finish off my collection for the pool room with gold in Italy.” As he gave his post-competition interviews he was joined by his childhood hero, US snowboarding legend Shaun White, who finished fourth on Friday.

The pair embraced and congratulated each other as they shared a touching moment. “I have had such a great time here in Beijing,” James said. “This has been such a special Winter Games.

This guy (White) is very, very special.” White replied: “( I’m ) trying not to cry in the background.” James was then asked: “How important has this guy been for the development of your sport?” The Aussie said: “Well, it’s OK to be upset, because I just about starting crying myself. I have never expressed it.

To Shaun, obviously huge respect to him. The guy is the GOAT.” “Thank you,” replied a choked-up White, who had earlier said: “I feel sorry for Scotty, I know he wanted that gold . . . but Ayumu just crushed.” 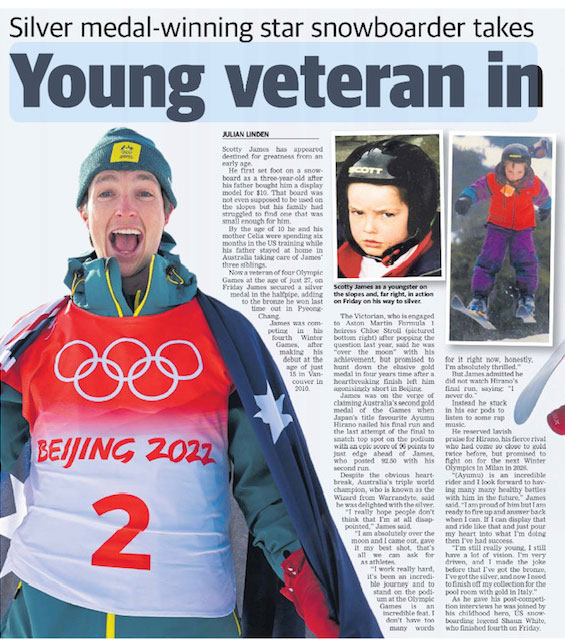