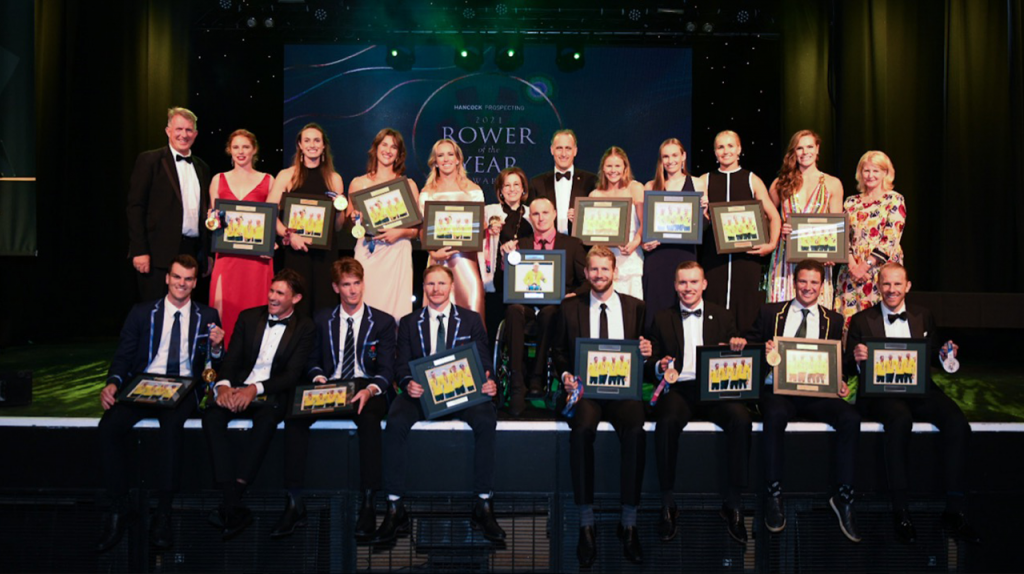 Australia’s Olympic champion rowing crews – the men’s and women’s fours – have won their respective male and female crew of the year awards at Rowing Australia’s 2021 Hancock Prospecting Rower of the Year Awards.

Morrison said: “The women’s sweep program has come a long way ever since the last quad to this quad. A number of different people have been part of the women’s four and the different sweep boats so it’s a real team effort.

“This award and this achievement is really a reflection of everyone who has been a part of the program and it means so much,” Jessica said. 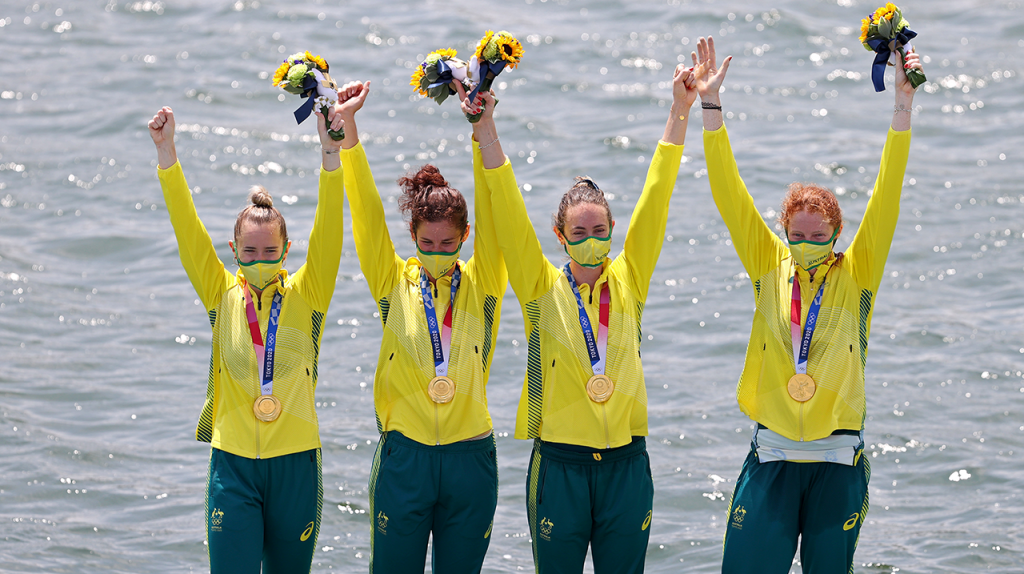 The women’s four were coached by John Keogh, who was presented with the coach of the year award. Under Keogh’s leadership over the recently concluded Olympic cycle, Australia’s female rowers achieved 23 World Cup medals, eight World Championship medals, qualified five crews to Tokyo and won an Olympic gold and bronze medal.

Keogh said: “It’s been a lot about the last five years, it’s not the destination it’s certainly been the journey. I’m extremely proud of the athletes and what they’ve achieved over the last five years and excited to see Australian rowing centralise their program and athletes buying into the program.

“One of the highlights over the last five years has been the coaching group and I’m very fortunate to have the support of Tom (Westgarth) and Ellen (Randell). There are no individual awards, it’s certainly been a team effort.”

The male crew of the year award was the icing on the cake for the men’s four of Alexander Hill OAM, Jack Hargreaves OAM, Spencer Turrin OAM and Alexander Purnell OAM, who reclaimed the gold medal for Australia in this boat class after a 25-year hiatus. Not since Atlanta 1996 has Australia won gold in this event. 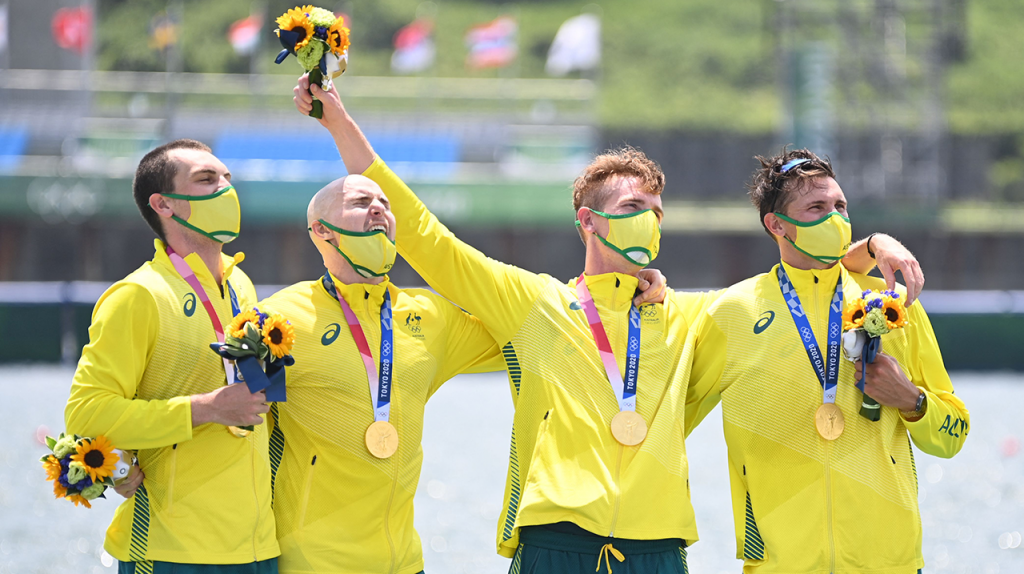 Tokyo Olympic bronze medallist Luke Letcher, and member of the men’s quadruple scull, was awarded 776BC rowers’ rower of the year – an award voted for by members of the 2021 Australian Rowing Team.

Luke said the moment was made more special as he also celebrates his retirement from international racing.

“This is an incredible way to end my career, being recognised by my peers. It’s been incredible to be a part of the Australian Rowing Team. This last season, we made a decision, we said what we wanted to do and we went out there and did it the best we could. I’m really proud of this last year and I’m really proud of what we’ve built as a crew,” Luke said.

The Gina Rinehart rowing leadership award was presented to dual Olympian Cameron Girdlestone. Cameron was recognised for his leadership qualities, as he is seen as a selfless individual who is always willing to help other rowers and teammates.

“I’m honoured to receive the Gina Rinehart rowing leadership award for Rowing Australia and for our performances in 2021. I’m absolutely chuffed to receive this award, it’s a huge honour,” Cameron said.

“I wouldn’t have been able to achieve what I did last year with my three other crewmates in Tokyo without the help and support of Mrs Rinehart. To receive this award is truly memorable and it will go right next to my Olympic bronze medal as a highlight of my career.” 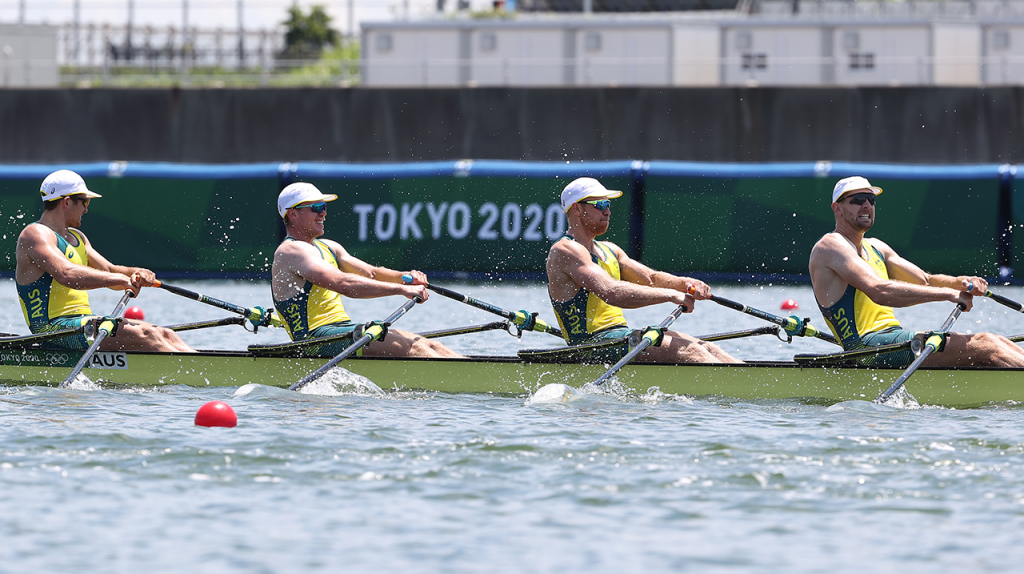 The Hancock Prospecting Rower of the Year Awards also recognises individuals for their tireless hard work behind the scenes.

Rowing administrator Andrew Guerin (Mercantile Rowing Club, Vic) won official of the year for his dedication to all aspects of the sport, from elite rowing to masters, club, state and national administration and team management at all levels. Guerin is one of the few people to be a life member of his club, state and Rowing Australia. He is well known for authoring the website Australian Rowing History.

Tamar Rowing Club’s Chris Symons (Tas) was presented with the Coles volunteer of the year award. Symons is an active committee member involved at club level in coaching, learn to row and boat and club maintenance. The L2 Boat Race Official is also a referee and regatta organiser for school-based events on the Tamar. Symons was the Boat Park Manager at the Australian Rowing Championships in 2021.

Newcastle Rowing Club (NSW) was presented the club of the year award. The club has experienced a 59 percent increase in membership from last season. So successful is their promotion that the club has had to place a hold on new members due to capacity limits. The club has an active and strong group of volunteers who engage with the community in Newcastle and Sydney and volunteers regularly attend coaching seminars and hour of power information sessions to upskill themselves. The club is a strong supporter of the Rowing NSW Indoor Rowing Series.

The pathways coach of the year, which recognises the integral part the pathways program plays in developing the future talent of Australian rowing, went to Melbourne University’s boat club high-performance coach Matt Ryan. Matt is a Beijing Olympic silver medallist and coached the 2021 under-23 men’s eight and coxless four.

Pathways athlete of the year was presented to Alex Nichol. Nicol is a rising star in the Rowing Australia pathways program. He was a member of the U21 men’s eight that defeated New Zealand at the U21 Trans-Tasman Regatta in Lake Karapiro (NZL).

Rowing Australia CEO Ian Robson said: “We congratulate and thank all the athletes, coaches, administrators and volunteers for all their hard work and sacrifice. Particularly the families and friends and club communities who have supported unconditionally the dreams and aspirations of all of our Olympic and Paralympic athletes.

“To make something special work, you need the front and back of house to operate as one. In the last five years, under some very challenging circumstances, all of our teams came together to achieve historic performances. I take this opportunity to congratulate all of our award winners and finalists, you are all great ambassadors of our sport.

“This positive momentum is just the perfect fuel to drive the next wave of growth of rowing in Australia,” Robson said.