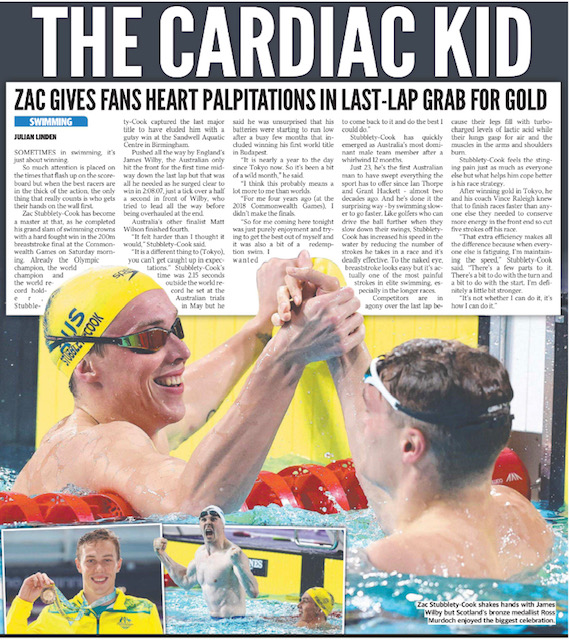 So much attention is placed on the times that flash up on the scoreboard but when the best racers are in the thick of the action, the only thing that really counts is who gets their hands on the wall first.

Zac Stubblety-Cook has become a master at that, as he completed his grand slam of swimming crowns with a hard fought win in the 200m breaststroke final at the Commonwealth Games on Saturday morning. Already the Olympic champion, the world champion and the world record holder, Stubblety-Cook captured the last major title to have eluded him with a gutsy win at the Sandwell Aquatic Centre in Birmingham.

Pushed all the way by England’s James Wilby, the Australian only hit the front for the first time midway down the last lap but that was all he needed as he surged clear to win in 2:08.07, just a tick over a half a second in front of Wilby, who tried to lead all the way before being overhauled at the end.

“It felt harder than I thought it would,” Stubblety-Cook said.

“It is a different thing to (Tokyo), you can’t get caught up in expectations.” Stubblety-Cook’s time was 2.15 seconds outside the world record he set at the Australian trials in May but he said he was unsurprised that his batteries were starting to run low after a busy few months that included winning his first world title in Budapest.

“It is nearly a year to the day since Tokyo now. So it’s been a bit of a wild month,” he said.

“I think this probably means a lot more to me than worlds.

“For me four years ago (at the 2018 Commonwealth Games), I didn’t make the finals.

“So for me coming here tonight was just purely enjoyment and trying to get the best out of myself and it was also a bit of a redemption swim. I wanted to come back to it and do the best I could do.”

Stubblety-Cook has quickly emerged as Australia’s most dominant male team member after a whirlwind 12 months.

Just 23, he’s the first Australian man to have swept everything the sport has to offer since Ian Thorpe and Grant Hackett – almost two decades ago. And he’s done it the surprising way – by swimming slower to go faster. Like golfers who can drive the ball further when they slow down their swings, Stubblety-Cook has increased his speed in the water by reducing the number of strokes he takes in a race and it’s deadly effective. To the naked eye, breaststroke looks easy but it’s actually one of the most painful strokes in elite swimming, especially in the longer races.

Competitors are in agony over the last lap because their legs fill with turbo-charged levels of lactic acid while their lungs gasp for air and the muscles in the arms and shoulders burn.

Stubblety-Cook feels the stinging pain just as much as everyone else but what helps him cope better is his race strategy.

After winning gold in Tokyo, he and his coach Vince Raleigh knew that to finish races faster than anyone else they needed to conserve more energy in the front end so cut five strokes off his race.