Article by Melissa Woods and Julian Linden courtesy of the West Australian. 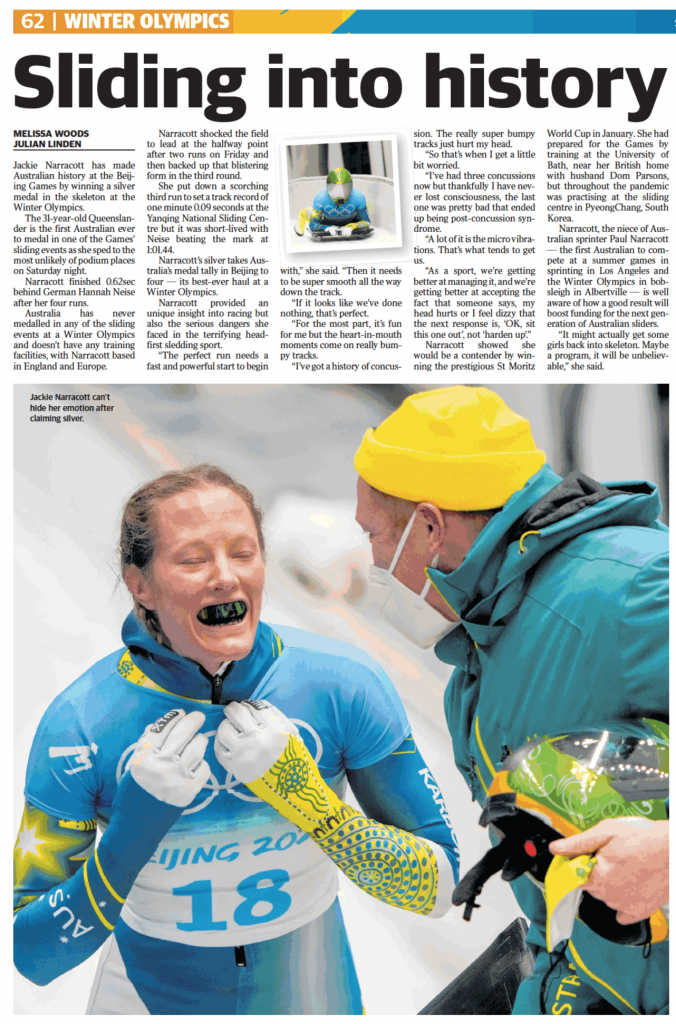 Jackie Narracott has made Australian history at the Beijing Games by winning a silver medal in the skeleton at the Winter Olympics.

The 31-year-old Queenslander is the first Australian ever to medal in one of the Games’ sliding events as she sped to the most unlikely of podium places on Saturday night. Narracott finished 0.62sec behind German Hannah Neise after her four runs.

Australia has never medalled in any of the sliding events at a Winter Olympics and doesn’t have any training facilities, with Narracott based in England and Europe.

Narracott shocked the field to lead at the halfway point after two runs on Friday and then backed up that blistering form in the third round.

She put down a scorching third run to set a track record of one minute 0.09 seconds at the Yanqing National Sliding Centre but it was short-lived with Neise beating the mark at 1:01.44.

Narracott provided a unique insight into racing but also the serious dangers she faced in the terrifying headfirst sledding sport. “The perfect run needs a fast and powerful start to begin with,” she said.

“Then it needs to be super smooth all the way down the track. “If it looks like we’ve done nothing, that’s perfect. “For the most part, it’s fun for me but the heart-in-mouth moments come on really bumpy tracks. “I’ve got a history of concussion.

The really super bumpy tracks just hurt my head. “So that’s when I get a little bit worried.

“I’ve had three concussions now but thankfully I have never lost consciousness, the last one was pretty bad that ended up being post-concussion syndrome.

“A lot of it is the micro vibrations . That’s what tends to get us.

Narracott showed she would be a contender by winning the prestigious St Moritz World Cup in January.

She had prepared for the Games by training at the University of Bath, near her British home with husband Dom Parsons, but throughout the pandemic was practising at the sliding centre in PyeongChang, South Korea.

Narracott, the niece of Australian sprinter Paul Narracott — the first Australian to compete at a summer games in sprinting in Los Angeles and the Winter Olympics in bobsleigh in Albertville — is well aware of how a good result will boost funding for the next generation of Australian sliders.

“It might actually get some girls back into skeleton. Maybe a program, it will be unbelievable ,” she said.