Article by Will Swanton courtesy of The Australian. 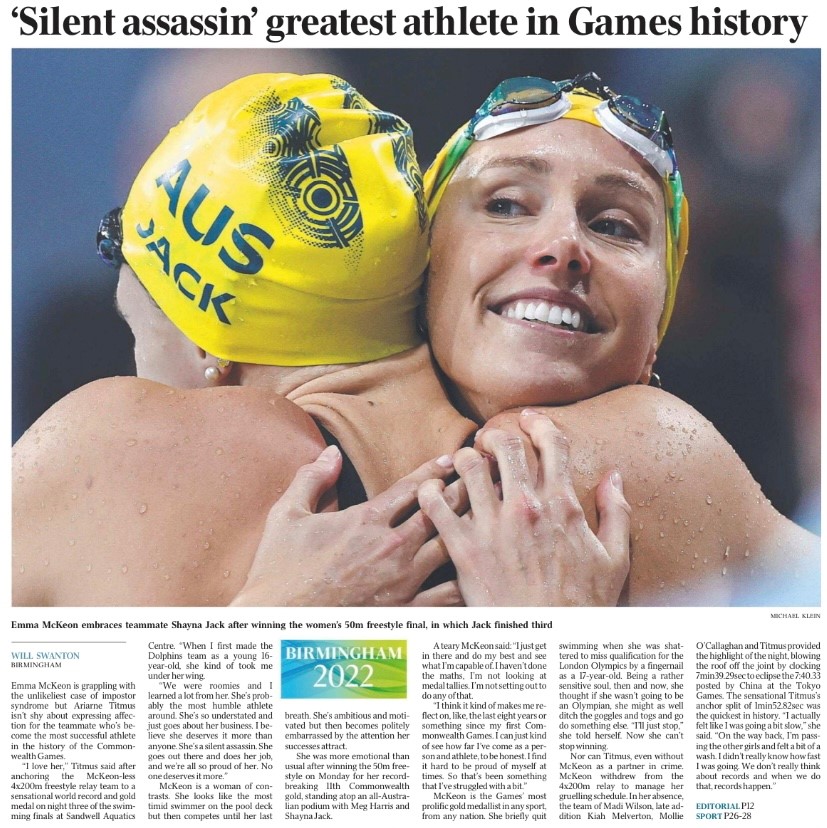 Emma McKeon is grappling with the unlikeliest case of impostor syndrome but Ariarne Titmus isn’t shy about expressing affection for the teammate who’s become the most successful athlete in the history of the Commonwealth Games.

“I love her,” Titmus said after anchoring the McKeon-less 4x200m freestyle relay team to a sensational world record and gold medal on night three of the swimming finals at Sandwell Aquatics Centre. “When I first made the Dolphins team as a young 16-year-old, she kind of took me under her wing.

“We were roomies and I learned a lot from her. She’s probably the most humble athlete around. She’s so understated and just goes about her business. I believe she deserves it more than anyone. She’s a silent assassin. She goes out there and does her job, and we’re all so proud of her. No one deserves it more.”

McKeon is a woman of contrasts. She looks like the most timid swimmer on the pool deck but then competes until her last breath. She’s ambitious and motivated but then becomes politely embarrassed by the attention her successes attract.

She was more emotional than usual after winning the 50m freestyle on Monday for her record-breaking 11th Commonwealth gold, standing atop an all-Australian podium with Meg Harris and Shayna Jack.

A teary McKeon said: “I just get in there and do my best and see what I’m capable of. I haven’t done the maths, I’m not looking at medal tallies. I’m not setting out to do any of that.

“I think it kind of makes me reflect on, like, the last eight years or something since my first Commonwealth Games. I can just kind of see how far I’ve come as a person and athlete, to be honest. I find it hard to be proud of myself at times. So that’s been something that I’ve struggled with a bit.”

McKeon is the Games’ most prolific gold medallist in any sport, from any nation. She briefly quit swimming when she was shattered to miss qualification for the London Olympics by a fingernail as a 17-year-old. Being a rather sensitive soul, then and now, she thought if she wasn’t going to be an Olympian, she might as well ditch the goggles and togs and go do something else. “I’ll just stop,” she told herself. Now she can’t stop winning.

Nor can Titmus, even without McKeon as a partner in crime. McKeon withdrew from the 4x200m relay to manage her gruelling schedule. In her absence, the team of Madi Wilson, late addition Kiah Melverton, Mollie O’Callaghan and Titmus provided the highlight of the night, blowing the roof off the joint by clocking 7min39.29sec to eclipse the 7:40.33 posted by China at the Tokyo Games. The sensational Titmus’s anchor split of 1min52.82sec was the quickest in history. “I actually felt like I was going a bit slow,” she said. “On the way back, I’m passing the other girls and felt a bit of a wash. I didn’t really know how fast I was going. We don’t really think about records and when we do that, records happen.”