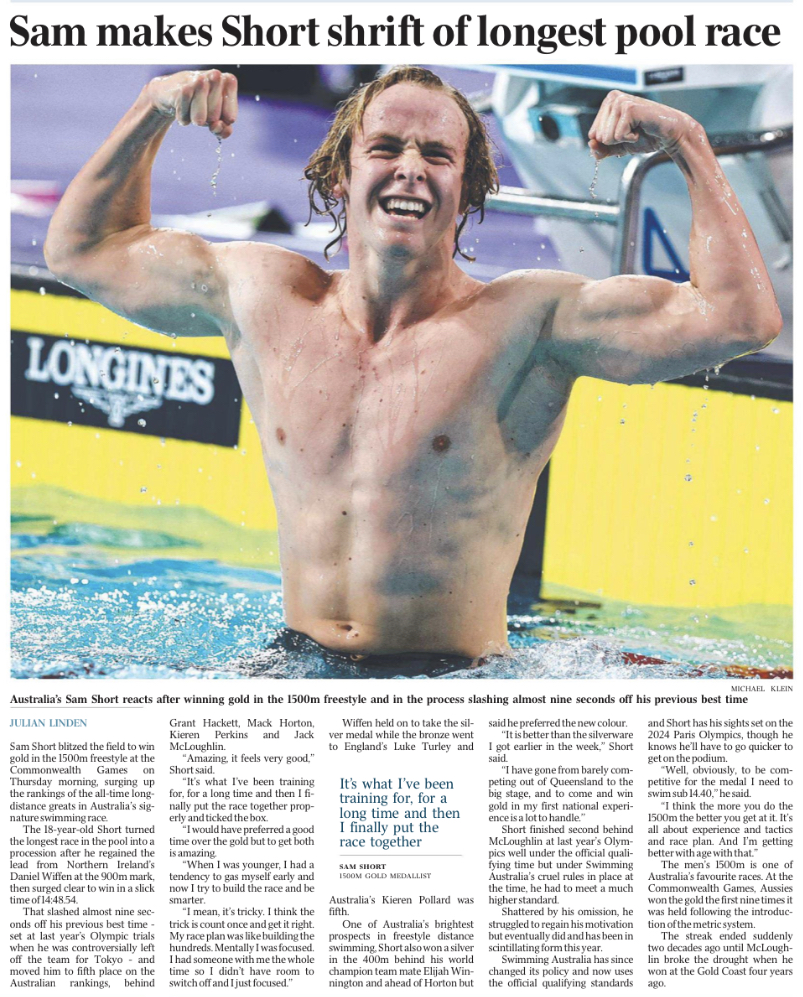 Sam Short blitzed the field to win gold in the 1500m freestyle at the Commonwealth Games on Thursday morning, surging up the rankings of the all-time long-distance greats in Australia’s signature swimming race.

The 18-year-old Short turned the longest race in the pool into a procession after he regained the lead from Northern Ireland’s Daniel Wiffen at the 900m mark, then surged clear to win in a slick time of 14:48.54.

That slashed almost nine seconds off his previous best time – set at last year’s Olympic trials when he was controversially left off the team for Tokyo – and moved him to fifth place on the Australian rankings, behind Grant Hackett, Mack Horton, Kieren Perkins and Jack McLoughlin.

“It’s what I’ve been training for, for a long time and then I finally put the race together properly and ticked the box.

“I would have preferred a good time over the gold but to get both is amazing.

“When I was younger, I had a tendency to gas myself early and now I try to build the race and be smarter.

“I mean, it’s tricky. I think the trick is count once and get it right. My race plan was like building the hundreds. Mentally I was focused. I had someone with me the whole time so I didn’t have room to switch off and I just focused.”

Wiffen held on to take the silver medal while the bronze went to England’s Luke Turley and Australia’s Kieren Pollard was fifth.

One of Australia’s brightest prospects in freestyle distance swimming, Short also won a silver in the 400m behind his world champion team mate Elijah Winnington and ahead of Horton but said he preferred the new colour.

“It is better than the silverware I got earlier in the week,” Short said.

“I have gone from barely competing out of Queensland to the big stage, and to come and win gold in my first national experience is a lot to handle.’’

Short finished second behind McLoughlin at last year’s Olympics well under the official qualifying time but under Swimming Australia’s cruel rules in place at the time, he had to meet a much higher standard.

Shattered by his omission, he struggled to regain his motivation but eventually did and has been in scintillating form this year.

Swimming Australia has since changed its policy and now uses the official qualifying standards and Short has his sights set on the 2024 Paris Olympics, though he knows he’ll have to go quicker to get on the podium.

“I think the more you do the 1500m the better you get at it. It’s all about experience and tactics and race plan. And I’m getting better with age with that.”

The men’s 1500m is one of Australia’s favourite races. At the Commonwealth Games, Aussies won the gold the first nine times it was held following the introduction of the metric system.

The streak ended suddenly two decades ago until McLoughlin broke the drought when he won at the Gold Coast four years ago.