RICH IN MEDALS ONLY 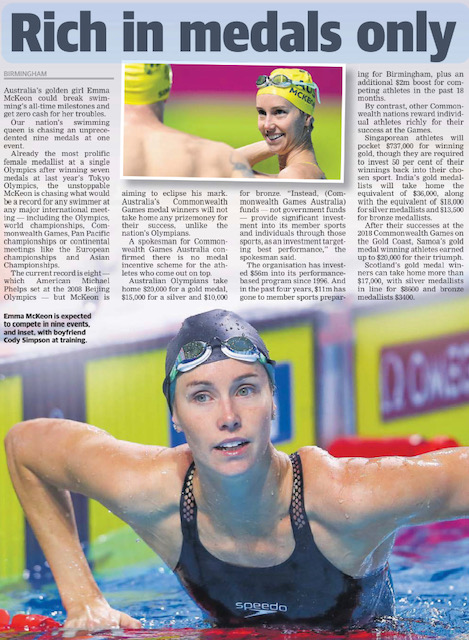 Our nation’s swimming queen is chasing an unprecedented nine medals at one event.

Already the most prolific female medallist at a single Olympics after winning seven medals at last year’s Tokyo Olympics, the unstoppable McKeon is chasing what would be a record for any swimmer at any major international meeting — including the Olympics, world championships, Commonwealth Games, Pan Pacific championships or continental meetings like the European championships and Asian Championships.

The current record is eight — which American Michael Phelps set at the 2008 Beijing Olympics — but McKeon is aiming to eclipse his mark.

Australia’s Commonwealth Games medal winners will not take home any prizemoney for their success, unlike the nation’s Olympians.

A spokesman for Commonwealth Games Australia confirmed there is no medal incentive scheme for the athletes who come out on top.

“Instead, (Commonwealth Games Australia) funds — not government funds provide significant investment into its member sports and individuals through those sports, as an investment targeting best performance,” the spokesman said.

The organisation has invested $56m into its performancebased program since 1996.

And in the past four years, $11m has gone to member sports preparing for Birmingham, plus an additional $2m boost for competing athletes in the past 18 months.

By contrast, other Commonwealth nations reward individual athletes richly for their success at the Games.

Singaporean athletes will pocket $737,000 for winning gold, though they are required to invest 50 per cent of their winnings back into their chosen sport.

After their successes at the 2018 Commonwealth Games on the Gold Coast, Samoa’s gold medal winning athletes earned up to $20,000 for their triumph.