Mining magnate Gina Rinehart has responded to news she has been sanctioned by Russia by issuing what amounts to a call to arms.

“We urgently need millions of smart mines in our thousands of kilometres of otherwise indefensible oceans, and capable missiles, war drones, and more,” she said.

One of 121 people in Australia indefinitely banned from Russia by the Kremlin’s foreign ministry, Rinehart yesterday released a statement calling for Australia to build up its defences.

“Much as I have very nice Russian friends and enjoyed very much my two visits to St Petersburg, and would love to revisit, I would not wish to do so if not welcomed, or if I have concerns for my safety. If speaking out in the manner above means I can never visit Russia again in my lifetime, so be it,” she said.

Yesterday, Russia’s Foreign Ministry posted an eclectic list of sanctioned Australians, including media executives, mining bosses, academics, defence officials and journalists, including the editors of the Herald and The Age. A statement on the ministry’s website said those named had supported Australia’s “Russophobic agenda”.

Nobody on the list openly expressed any dismay about their new status. Indeed, many have proclaimed it “a badge of honour”, including Fortescue’s founder Andrew ‘Twiggy’ Forrest and South Australian Premier Peter Malinauskas, who said he thought his Lithuanian heritage prompted the sanction.

“Oh, I was a bit proud,” the premier said as he arrived in Canberra for National Cabinet. “It’s fair to say that popping into Russia wasn’t on my to-do list. Our 10th wedding anniversary celebrations weren’t planned to be spent in Siberia, so I’m not too fussed.”

Malinauskas was the only elected official on the latest list, although 228 Australian politicians and officials were banned from Russia in April, including Anthony Albanese and the then-prime minister Scott Morrison, in retaliation for Canberra’s sanctions.

Speaking at the Financial Times Hydrogen Summit just hours after he was slapped with sanctions by the Kremlin, Forrest said he would wear his sanction as a badge of honour and that he had no regrets about calling out Russian over the invasion of Ukraine. “I don’t take it lightly, I take it seriously.

But I would say to other leaders in the room that you are not worth talking to unless you have been sanctioned.”

He accused Western politicians of “propping up the Kremlin” by relying on natural gas imports from Russia instead of ramping up the production of alternative energy capabilities.

Herald editor Bevan Shields said that while he wasn’t planning a holiday in Russia any time soon, the ban might affect others on the list: “If telling the truth about Russian President Vladimir Putin, an accused war criminal, and his brutal invasion of Ukraine leads to sanctions, I am sure journalists will take that as evidence that we are doing our jobs well.”

ABC radio host Patricia Karvelas said waking at 3.30am to news she was sanctioned was like a “hallucination reality dreamscape”.

The Herald’s newly sanctioned leader writer Geoff Winestock said the list is “just another sign of the Putin inferiority complex”.

Winestock, who lived and worked in Moscow for seven years, said most people included on the Australian sanctions list had never been to Russia and had no intention of visiting in the future. “I hope democracy returns to Russia, but I’m not holding my breath,” he added.

A spokesperson from Nine Entertainment Group said the sanctioning of company employees “won’t change our journalism and reporting on the events occurring in Ukraine”. 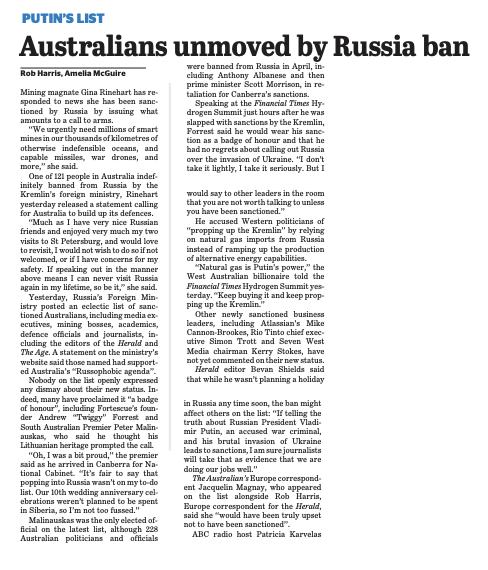 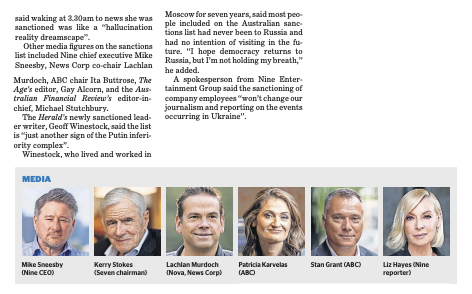 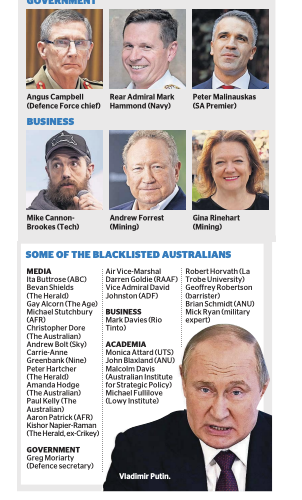