Article by Will Swanton & Wally Mason courtesy of the Australian. 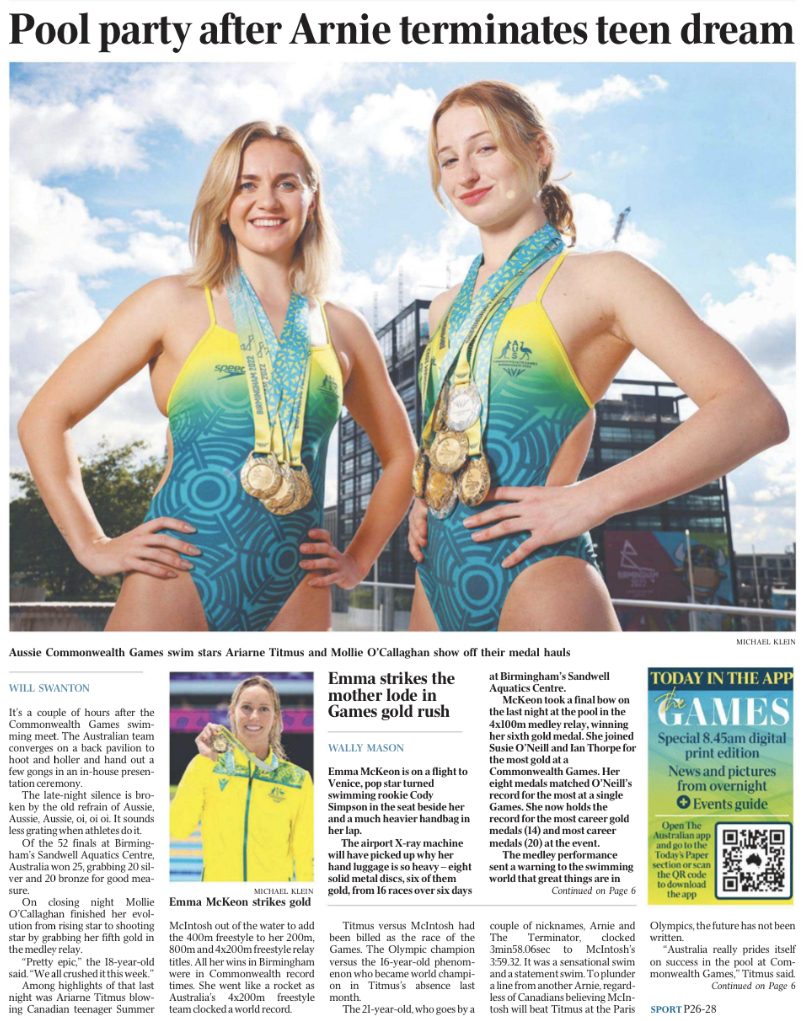 It’s a couple of hours after the Commonwealth Games swimming meet. The Australian team converges on a back pavilion to hoot and holler and hand out a few gongs in an in-house presentation ceremony.

On closing night Mollie O’Callaghan finished her evolution from rising star to shooting star by grabbing her fifth gold in the medley relay.

Among highlights of that last night was Ariarne Titmus blowing Canadian teenager Summer McIntosh out of the water to add the 400m freestyle to her 200m, 800m and 4x200m freestyle relay titles. All her wins in Birmingham were in Commonwealth record times. She went like a rocket as Australia’s 4x200m freestyle team clocked a world record.

Titmus versus McIntosh had been billed as the race of the Games. The Olympic champion versus the 16-year-old phenomenon who became world champion in Titmus’s absence last month.

The 21-year-old, who goes by a couple of nicknames, Arnie and The Terminator, clocked 3min58.06sec to McIntosh’s 3:59.32. It was a sensational swim and a statement swim. To plunder a line from another Arnie, regardless of Canadians believing McIntosh will beat Titmus at the Paris Olympics, the future has not been written.

“Australia really prides itself on success in the pool at Commonwealth Games,” Titmus said. “And potentially there’s more pressure to win here than at the Olympics, sometimes, because we’re so dominant. I came here with the goal to win all four. I’m excited to get the job done personally but also for the country.

“Summer pushed me the whole way. I knew she would be there. I just wanted to do my best and mentally be there. I think I did that. The 400m is my baby.”

McIntosh was put back in her box. Schooled. “It was a great opportunity to race someone as fast as Ariarne,” she said. “It was an honour to race her … People like her are great examples.”

Emma McKeon took a final bow in the 4x100m medley relay, winning her sixth gold medal. She joined Susie O’Neill and Ian Thorpe for the most gold at a Commonwealth Games. Her eight medals in Birmingham matched O’Neill’s record for the most at a single Games.

Sam Short won the 1500m freestyle in a throwback to the reigns of Kieren Perkins and Grant Hackett. “It’s an extremely rich history. I have a long way to get to their level but I’m on the right track,” he said.