Article by Greg Brown courtesy of The Australian. 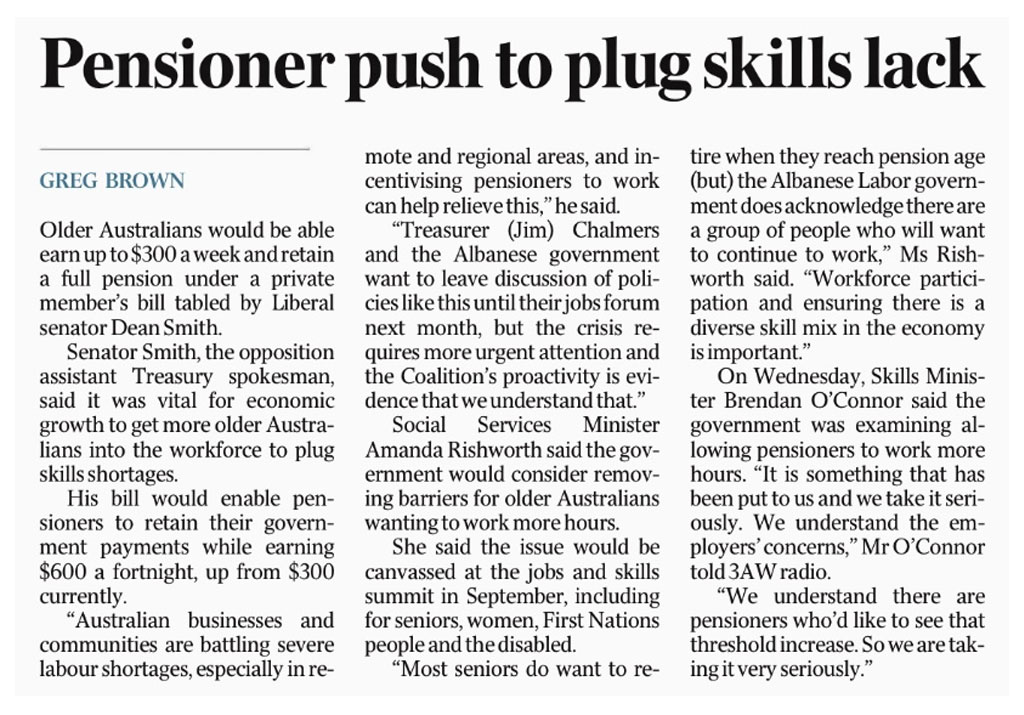 Older Australians would be able earn up to $300 a week and retain a full pension under a private member’s bill tabled by Liberal senator Dean Smith.

Senator Smith, the opposition assistant Treasury spokesman, said it was vital for economic growth to get more older Australians into the workforce to plug skills shortages.

His bill would enable pensioners to retain their government payments while earning $600 a fortnight, up from $300 currently.

“Australian businesses and communities are battling severe labour shortages, especially in remote and regional areas, and incentivising pensioners to work can help relieve this,” he said.

“Treasurer (Jim) Chalmers and the Albanese government want to leave discussion of policies like this until their jobs forum next month, but the crisis requires more urgent attention and the Coalition’s proactivity is evidence that we understand that.”

She said the issue would be canvassed at the jobs and skills summit in September, including for seniors, women, First Nations people and the disabled.

“Most seniors do want to retire when they reach pension age (but) the Albanese Labor government does acknowledge there are a group of people who will want to continue to work,” Ms Rishworth said. “Workforce participation and ensuring there is a diverse skill mix in the economy is important.”

On Wednesday, Skills Minister Brendan O’Connor said the government was examining allowing pensioners to work more hours. “It is something that has been put to us and we take it seriously. We understand the employers’ concerns,” Mr O’Connor told 3AW radio.

“We understand there are pensioners who’d like to see that threshold increase. So we are taking it very seriously.”