No regrets ‘I’ve given it my best’ 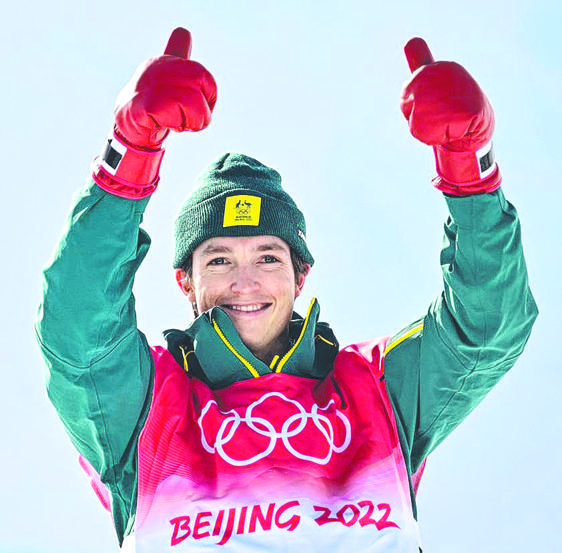 SCOTTY James says he has no regrets about opting out of trying the one trick that could have won him the gold medal.

The Aussie snowboarding superstar was awarded silver in the men’s halfpipe final after a breathtaking second run that would have won him the top prize at virtually any other competition.

James was only denied the gold because Japanese sensation Ayumu Hirano nailed the triple cork — snowboarding’s hardest and most difficult trick — on the final run of the competition.

Gracious in defeat, James congratulated his Japanese rival for becoming the first man to land the trick with a clean run, saying he was fine with coming second.

“I’m absolutely and incredibly over the moon. I came here and gave it my best shot and that’s all I could have asked for.” The Olympic bronze medallist four years ago, James took the lead after the second of the three rounds but knew there was a chance Hirano could overtake him.

Last to go because he finished first in qualifying, Hirano had already landed the triple cork in his first two runs so was always going to have one more shot at getting it done perfectly in his final run.

That left James— going second-last — with a dilemma about what to do.

With nothing to lose, James had the option of having a go at it himself on his last run but, after crashing on his first run and seeing a lot of other competitors, including Hirano, come to grief, he decided against it after consulting his coach James Jackson.

“Obviously, we’ve trained the triple cork, I do the cab triple cork and it was in my plan and my regiment to do it,” James said.

“But you can’t predict what’s going to happen on the day and, in that moment, it’s not a trick to mess around with because the margin for error is none.”

“I was struggling a little bit today but after we landed the second run, which was great, I went over to my coach, James, whom obviously I trust with my life.”

“I said, ‘I’m with you, what do you want me to do’? “Because I was ready to do whatever I needed to do. And he well kind of felt the same way, a lot of people were crashing in that spot.”

James had good reason not to want to gamble everything on the triple cork because there was no guarantee it would score better than his previous run.

Hirano had landed the trick on both of his runs but still did not score as many points as the Australian, whose overall sequence of tricks was technically better.

So, when he executed that perfectly, the only way he could be beaten was if someone did something no one else had done before, which Hirano did.

“I’m not upset at all,’’ James said. “I’m honestly just really proud of the result and being an Australian standing on the podium in a winter sport.

“The triple cork is kind of the pinnacle. Unless we build a bigger halfpipe, it’s a little bit hard to really push much more than a triple cork because you can’t go high enough.

“I’ve done it now. “I didn’t obviously get it done today, but I know what I can do and I’ll put that into action and be competitive for as long as I want to be competitive.” 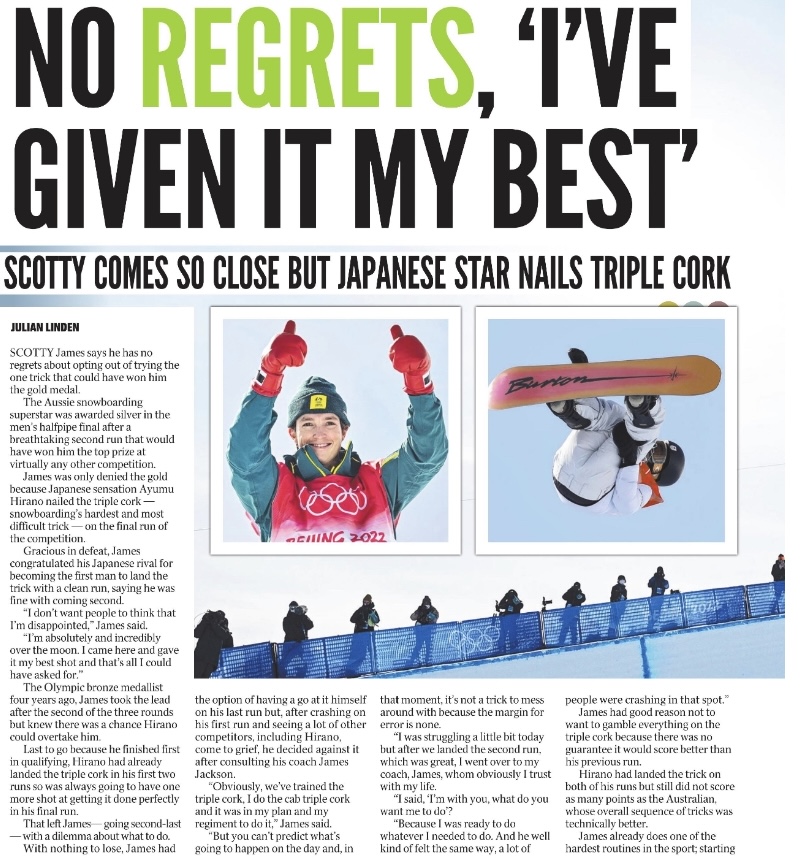 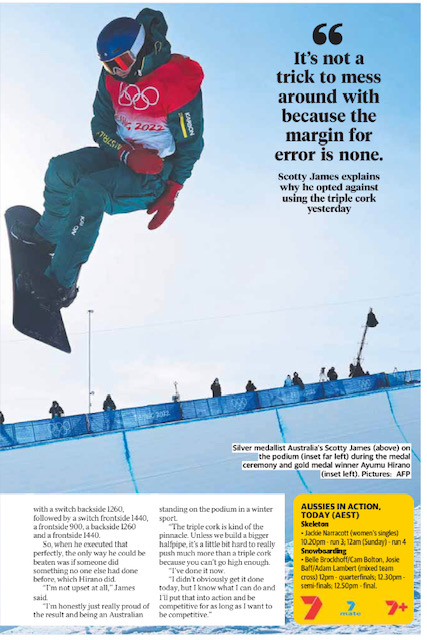