News Corp is going ‘only positive’ on climate but did Gina Rinehart miss the memo?

Article by Amanda Meade courtesy of The Guardian.

It seems the billionaire is not convinced by the Murdoch empire’s new Mission Zero campaign, and neither are its star commentators; Plus: Tomalaris rides off

The headline was promising – Gina backs renewables – but not even a Murdoch empire-led campaign could convince Australia’s richest person of the need to urgently reduce greenhouse emissions. In an exclusive interview with Adelaide tabloid the Advertiser, Rinehart expressed concern for poor farmers who couldn’t afford to experiment with solar pumps and electric vehicles like she can. 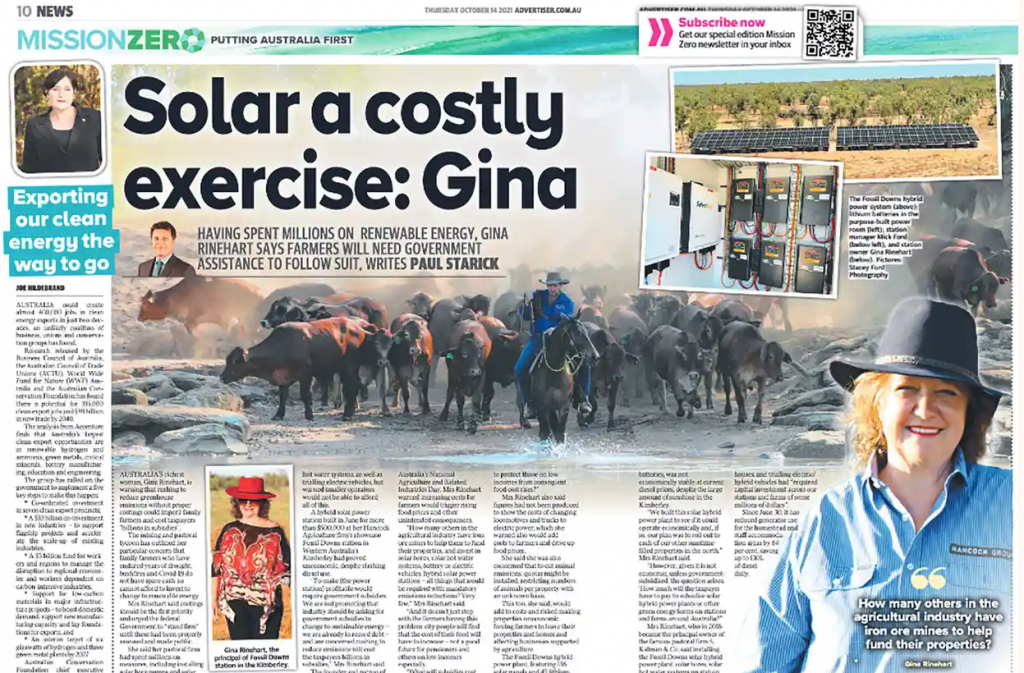 “We are concerned rushing to reduce emissions will cost the taxpayers billions in subsidies,” Rinehart told the ’Tiser.

“And it doesn’t just stop with the farmers having this problem; city people will find that the cost of their food will have to increase – not a good future for pensioners and others on low incomes especially.”

It was not the vibe the blanket campaign across all the tabloids was going for. After all, on Monday News Corp had promised “only positive stories”.

“Perhaps the major reason that action on climate change has so repeatedly stalled in this country is that the debate has fallen victim to a culture of constant complaint,” the Mission Zero campaign said. “That nothing is ever good enough and everything is too little too late.

“Such extreme negativity does nothing to encourage progress and so here you will see only positive stories: real, practical and pragmatic solutions that will help the planet and also help Australia’s interests as well.”

Rinehart obviously didn’t get the memo.