Article by Gina Rinehart courtesy of the Spectator Australia. 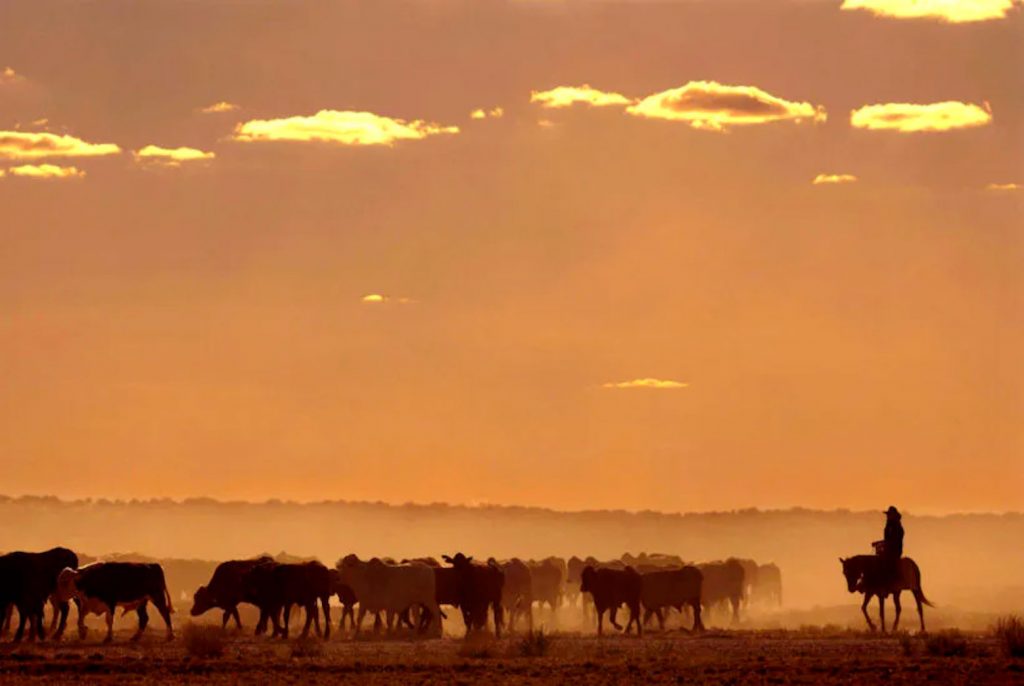 National Agriculture and Related Industries Day is our day to celebrate and acknowledge the over 300,000 hard-working men and women across our essential industry.

I admire your common sense, sense we need much more of, especially in government, and your good Aussie values, and your huge contribution every day, rain hail or shine, droughts floods fires, despite many difficulties, to our country. As Thomas Jefferson said, “Agriculture is our wisest pursuit, because it will in the end contribute most to our real wealth, good morals and happiness.”

Our new CEO of Agriculture, John McKillop has added: “Agriculture has always been the backbone of this great nation. From the early days of European settlement, in times of war, droughts and floods, people on the land keep toiling, producing food and fibre for the nation and the world, facing challenges that city-folk could only imagine. For them, a labour shortage means a longer wait for a latte, but for those on the land, it means the milk doesn’t even make it to the café. We need government policies that encourage those who can work to do so.”

The pandemic has demonstrated yet again, that we in the agricultural industry are a resilient group of Australians, doing what we can to withstand uncertain and difficult times. We have proactively sought to diversify international markets we export to and have continued to increase the range of products we produce.

And again, we’ve battled through tough problems facing Australian agriculture. This past year, difficulties have been increased given the consequences of years of severe drought, fires, floods, plus, uncertainty of international trade relationships mainly when dealing with China on exports such as barley and wine, access to farmworkers, Covid, rising international freight costs, and pests. In particular, the mouse plague that I saw first hand on our Queensland farms, plus the rising numbers of dingoes and other wild dogs and feral beasts, as well as rising numbers of crocodiles. And as always the increasing mountain of government paperwork. Now on top of all this, the big elephant in the room, is our federal government’s commitment to net zero.

As Will Rogers said: “The farmer has to be an optimist, or he wouldn’t still be a farmer!”

How on earth after so many bad years depleting farmers resources, can those in agriculture be expected to dish out for, electric vehicles, approximately double the cost of fossil fuelled vehicles? Or for solar panels for high cost power installations? Or the costs added to the transport industries of new non fossil-fuel trucks and locos, which affects all supplies farmers need, including having to shift stock for markets and otherwise, plus the raised costs for suppliers and all the other many costs involved in meeting net zero?

Unlike our neighbour and agriculture competitor New Zealand, we haven’t carved out agriculture from our emissions. Sensibly, New Zealand didn’t waste taxpayers’ money going to the Glasgow conference, which in itself surely added to emissions — far more than our belching cows — if one truly added up all the emissions of the jet-setters, including all their accommodation, heating, washing, cleaning, lighting and meals and more. It’s hard to know the real figures involved in agriculture emissions, but in Australia, it’s generally estimated that around 11 per cent of our emissions are from agriculture, some 70 per cent of that from livestock. Watch out belching cows, many left green activists aim for less livestock in our country.

But it gets worse, If you look at another site, the national greenhouse inventory, which states 14 per cent of Australian emissions are from agriculture, 11 per cent from livestock. So I assumed this was yet another left wing activist organisation, but guess what, this is a body we taxpayers fund, under the department of industry, science, energy and resources, from their 31 August, 2021, quarterly report. And I repeat our government has not excluded agriculture from net zero commitments, deserting their base of supporters in agriculture.

I know farmers all have long, often exhausting days and many have to stay up late at night contending with increasing government paperwork, but somehow you will need to make time out of each day, to stand up for our industry. Write on Facebook and other social media, send letters to media, get on talkback radio. Write to your MPs, repeatedly, and encourage your suppliers, friends and families to do likewise. I know our fantastic industry shouldn’t have to do this, but we can’t afford to bury our heads in the sand hoping it will all go away. I promise you, it won’t.

The Federal Government cocoon which is increasingly isolated from agriculture and small businesses, which together are the largest private employers in Australia, had committed to aiming for Australia’s agriculture industry becoming a one hundred million dollar industry by 2030. How? Are they going to stop moves to reduce the numbers of our belching livestock, which are the major sector of our income-earning agricultural industry? How on earth can we increase agricultural revenue if the major part of such revenue is from livestock? We hear about replacing natural feed for our livestock with seaweed pellets, yet no mention of tax and license fee cuts so that livestock owners can try to afford these pellets. Do those in government even know how much a cow eats each day? Polls show that one of the concerns of voters is not limiting agriculture but growing the economy.

Dwight D. Eisenhower said: “Farming looks mighty easy when your plough is a pencil and you’re a thousand miles from the cornfield.”

We must help our industry survive and grow by continuing to reform the legislation that impacts Australian agriculture. Here are some ideas:

1 To help the labour shortage and resulting supplies delay problems, allow pensioners who want to work the ability to do so without experiencing hefty tax rates or large percentages of their pension being taken away. This will require changes to the government’s pension arrangements, and in my view will give pensioners who wish to work a great improvement in their lives, even if just to put on solar panels for hot water, or to buy an electric vehicle, or warmer clothes and doonas to save heating bills, or home insulation to help the governments net zero agenda! Perhaps we need to remind our net zero immersed government, that without our increasing elderly population being able to afford net zero requirements, how can they meet their targets?

2 Greatly reduce unnecessary government tape and license fees in high cost Australia and eliminate payroll tax and stamp duty, both of which were meant to go decades ago, when state governments were supposed to live off GST and hefty mining royalties. As Ronald Reagan famously said, “governments first duty is to protect the people, not run their lives.”

3 Allow farmers to clear their land to decrease the risk of devastating and dangerous bushfires, plus compensate for government regulations causing fires to spread, through restricting clearing and not looking after state forests and national parks so they become tinderboxes. And return money charged to farmers for fines, for clearing to protect their family, staff, pets and infrastructure.

5 Recognise that for the agricultural industry, water is king. Let farmers build dams, plus where the country is suitable, build hydroelectricity projects, enabling more water for agriculture – water that otherwise flows uselessly to the sea. And do it without more years of delay. Queensland’s government manages to remove its environmental and other government tape when it thinks it will get votes in so doing, such as for the proposed hydrogen plant at Gladstone, in the state development area, which will need to use vast amounts of water and, unlike livestock, is flammable and combustible. How long did that approval take from when the premier announced this project and some taxpayer millions to help fund it? About a month! Yet it takes about two years in WA to get approval for one turkey nest, so stock can drink on the often long treks to stockyards.

6 Make the changes necessary to protect our beef and lamb from having its reputation for safe, wholesome, nutritious food, without chemicals, tarnished by some of the fake-meat manufacturers, who when or if they add chemicals, should so state.

7 Compensate farmers for the loss of property rights that occurred when the Howard government incentivised the states to introduce tree clearing bans, solely for the purpose of meeting the Kyoto targets.

We hear much noise rather than facts about how net zero and the green industry will create new jobs.

Indeed. The miles of solar panels being planned will need wiping to be effective, and the millions of dead bats and birds, lives claimed by wind power infrastructure, will need collecting and burying. Industries will need to be created to deal with the old solar panels, perhaps burying them if economical ways can’t be found without government handouts to deal with panels which need changing every 8 to 10 years to maintain effectiveness. And other taxpayer-funded green industries will be required, maybe including manufacturing and transporting seaweed pellets.

I’m not sure if you’re excited by such new green industries, or working in factories to build the new green this or that that most in the agricultural industry won’t be able to afford, or would prefer staying on your own farms, and truly contributing to feeding our fellow countrymen, and supplying our produce to countries who need our produce. Which our industry does so well and should be rightly proud of.

I have struggled to find positive messages to include, but feel I’d be failing as patron, if I didn’t speak frankly, with concerns about the future of our essential industry, an industry iconic to our country, our culture and our history. Our farmers are largely still struggling, please consider ways you can help, be that via rural aid, Royal Flying Doctor Service, or other fine rural charities.

George Washington said: “Agriculture is the most healthful, most useful and most noble employment of man.“

John Connell has said: “To be a farmer is to be a student forever, for each day brings something new.”

And Franklin Roosevelt said: “We cannot always build a future for our youth, but we can build our youth for the future.”

Ending on a positive note, poultry, fertilisers and farm machinery are touted to be leading performers this financial year in the agricultural sector, of course, the last two depend on a healthy agriculture industry, as do all the industries that agriculture supports.

“When eating fruit, remember the one who planted the tree“, is an old proverb, and “In winter’s chill or summer’s heat, farmers work so the world can eat.“

Please join me in another enthusiastic round of applause, for all in our agriculture industry.

Gina Rinehart is the Executive Chairman of Hancock Prospecting. This is an edited version of a speech given for National Agriculture and Related Industries Day.