Article by Steve Butler courtesy by The West Australian. 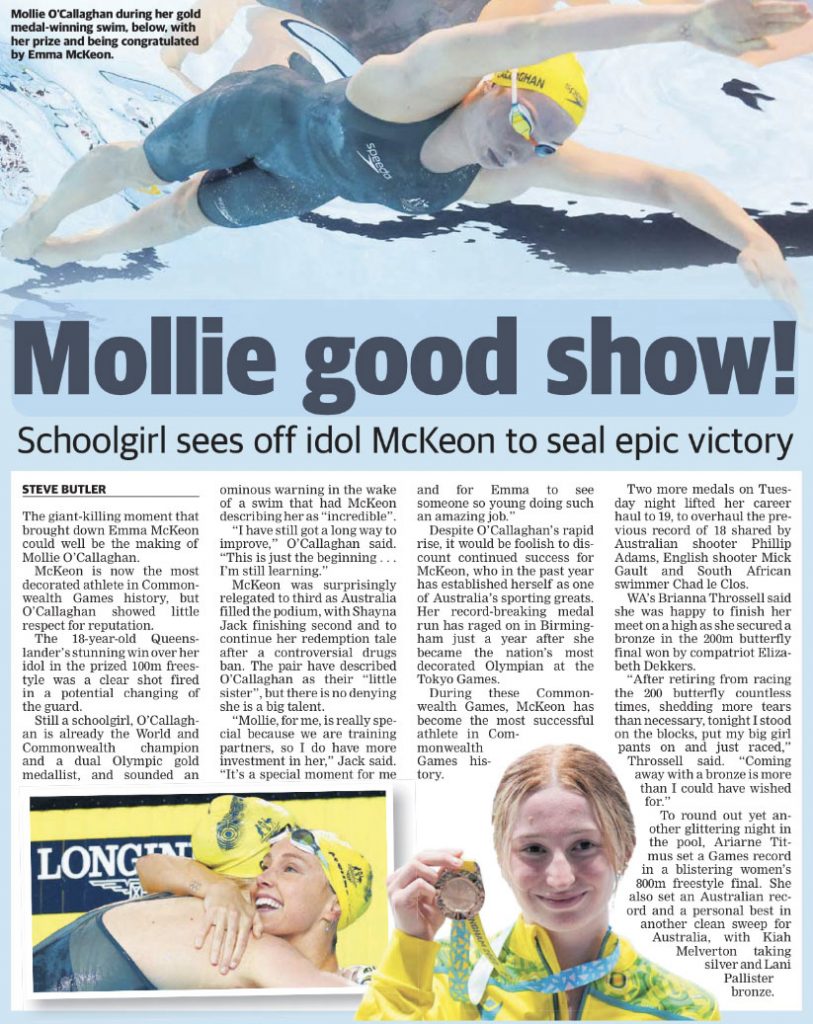 The giant-killing moment that brought down Emma McKeon could well be the making of Mollie O’Callaghan .

McKeon is now the most decorated athlete in Commonwealth Games history, but O’Callaghan showed little respect for reputation.

The 18-year-old Queenslander’s stunning win over her idol in the prized 100m freestyle was a clear shot fired in a potential changing of the guard.

Still a schoolgirl, O’Callaghan is already the World and Commonwealth champion and a dual Olympic gold medallist, and sounded an ominous warning in the wake of a swim that had McKeon describing her as “incredible”.

“I have still got a long way to improve,” O’Callaghan said. “This is just the beginning . . . I’m still learning.”

McKeon was surprisingly relegated to third as Australia filled the podium, with Shayna Jack finishing second and to continue her redemption tale after a controversial drugs ban. The pair have described O’Callaghan as their “little sister” , but there is no denying she is a big talent.

“Mollie, for me, is really special because we are training partners, so I do have more investment in her,” Jack said. “It’s a special moment for me and for Emma to see someone so young doing such an amazing job.”

Despite O’Callaghan’s rapid rise, it would be foolish to discount continued success for McKeon, who in the past year has established herself as one of Australia’s
sporting greats. Her record-breaking medal run has raged on in Birmingham just a year after she became the nation’s most decorated Olympian at the Tokyo Games.

WA’s Brianna Throssell said she was happy to finish her meet on a high as she secured a bronze in the 200m butterfly final won by compatriot Elizabeth Dekkers.

“After retiring from racing the 200 butterfly countless times, shedding more tears than necessary, tonight I stood on the blocks, put my big girl pants on and just raced,” Throssell said. “Coming away with a bronze is more than I could have wished for.”

To round out yet another glittering night in the pool, Ariarne Titmus set a Games record in a blistering women’s 800m freestyle final. She also set an Australian record and a personal best in another clean sweep for Australia, with Kiah Melverton taking silver and Lani Pallister bronze.