Article by Christine Lacy courtesy of the Australian. 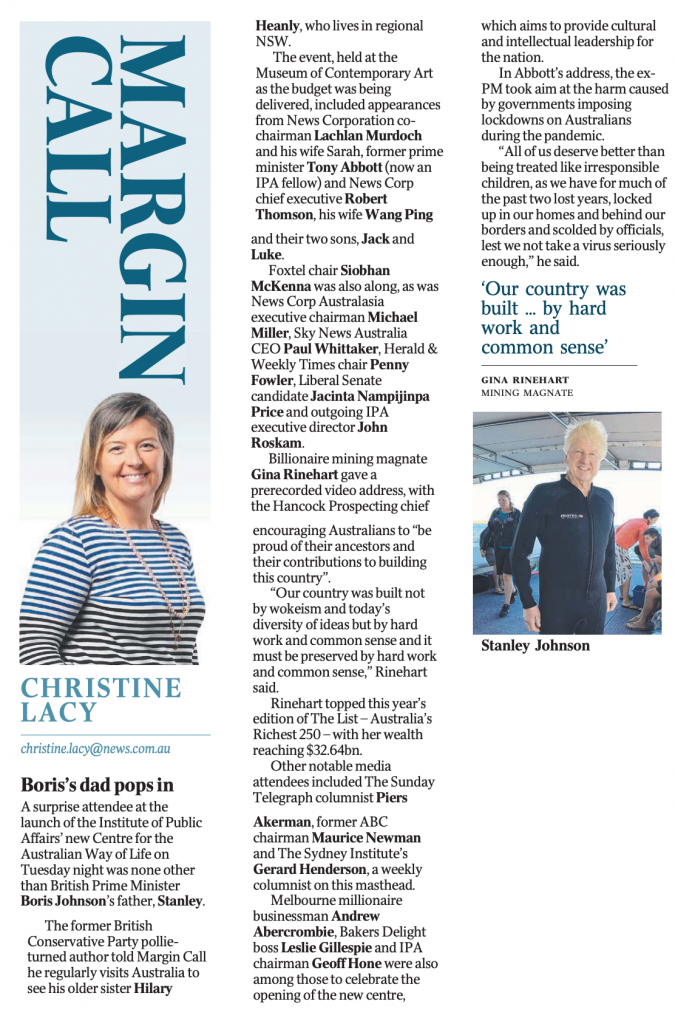 A surprise attendee at the launch of the Institute of Public Affairs’ new Centre for the Australian Way of Life on Tuesday night was none other than British Prime Minister Boris Johnson’s father, Stanley.

The event, held at the Museum of Contemporary Art as the budget was being delivered, included appearances from News Corporation cochairman Lachlan Murdoch and his wife Sarah, former prime minister Tony Abbott (now an IPA fellow) and News Corp chief executive Robert Thomson, his wife Wang Ping and their two sons, Jack and Luke.

Billionaire mining magnate Gina Rinehart gave a prerecorded video address, with the Hancock Prospecting chief encouraging Australians to “be proud of their ancestors and their contributions to building this country”.

Rinehart topped this year’s edition of The List Australia’s Richest 250 with her wealth reaching $32.64bn.

Melbourne millionaire businessman Andrew Abercrombie, Bakers Delight boss Leslie Gillespie and IPA chairman Geoff Hone were also among those to celebrate the opening of the new centre, which aims to provide cultural and intellectual leadership for the nation.

In Abbott’s address, the exPM took aim at the harm caused by governments imposing lockdowns on Australians during the pandemic.

“All of us deserve better than being treated like irresponsible children, as we have for much of the past two lost years, locked up in our homes and behind our borders and scolded by officials, lest we not take a virus seriously enough,” he said.