Article by Julian Linden and Erin Smith courtesy of The Daily Telegraph. 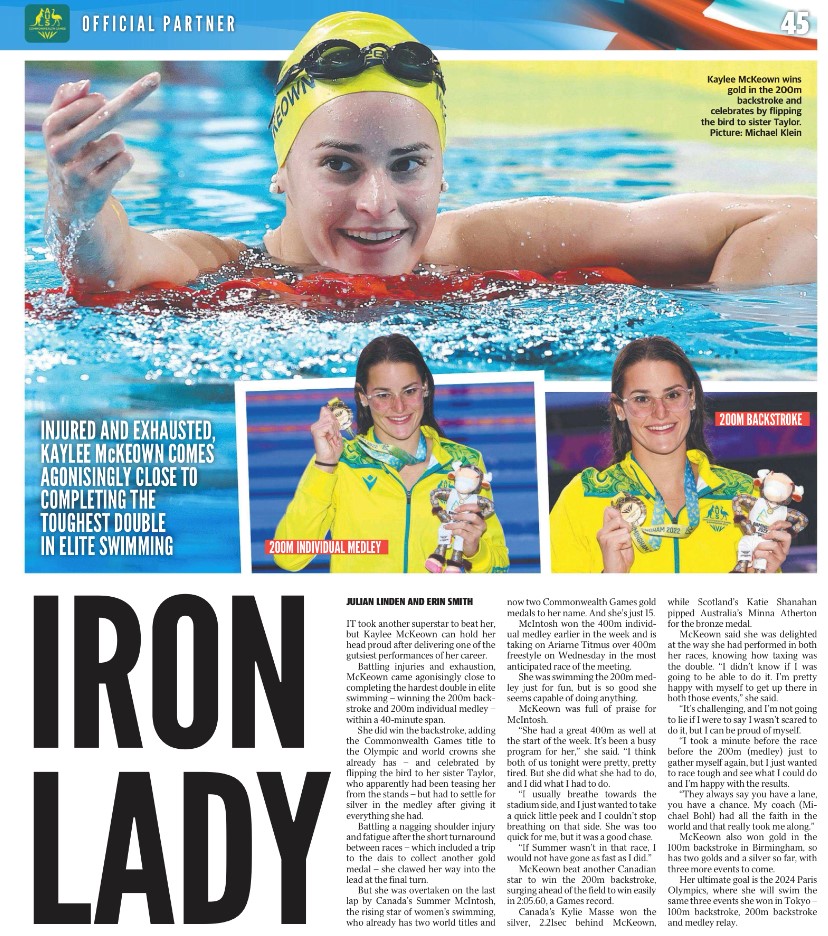 IT took another superstar to beat her, but Kaylee McKeown can hold her head proud after delivering one of the gutsiest performances of her career.

She did win the backstroke, adding the Commonwealth Games title to the Olympic and world crowns she ­already has – and celebrated by ­flipping the bird to her sister Taylor, who apparently had been teasing her from the stands – but had to settle for silver in the medley after giving it everything she had.

Battling a nagging shoulder injury and fatigue after the short turnaround between races – which included a trip to the dais to collect another gold medal – she clawed her way into the lead at the final turn.

But she was overtaken on the last lap by Canada’s Summer McIntosh, the rising star of women’s swimming, who already has two world titles and now two Commonwealth Games gold medals to her name. And she’s just 15.

McIntosh won the 400m individual medley earlier in the week and is taking on Ariarne Titmus over 400m freestyle on Wednesday in the most anticipated race of the meeting.

She was swimming the 200m medley just for fun, but is so good she seems capable of doing anything.

McKeown was full of praise for McIntosh.

“She had a great 400m as well at the start of the week. It’s been a busy program for her,” she said. “I think both of us tonight were pretty, pretty tired. But she did what she had to do, and I did what I had to do.

“I usually breathe towards the ­stadium side, and I just wanted to take a quick little peek and I couldn’t stop breathing on that side. She was too quick for me, but it was a good chase.

“If Summer wasn’t in that race, I would not have gone as fast as I did.”

McKeown beat another Canadian star to win the 200m backstroke, ­surging ahead of the field to win easily in 2:05.60, a Games record.

McKeown said she was delighted at the way she had performed in both her races, knowing how taxing was the double. “I didn’t know if I was going to be able to do it. I’m pretty happy with myself to get up there in both those events,” she said.

“It’s challenging, and I’m not going to lie if I were to say I wasn’t scared to do it, but I can be proud of myself.

“I took a minute before the race before the 200m (medley) just to gather myself again, but I just wanted to race tough and see what I could do and I’m happy with the results.

“They always say you have a lane, you have a chance. My coach (Michael Bohl) had all the faith in the world and that really took me along.”

McKeown also won gold in the 100m backstroke in Birmingham, so has two golds and a silver so far, with three more events to come.

Her ultimate goal is the 2024 Paris Olympics, where she will swim the same three events she won in Tokyo – 100m backstroke, 200m backstroke and medley relay.