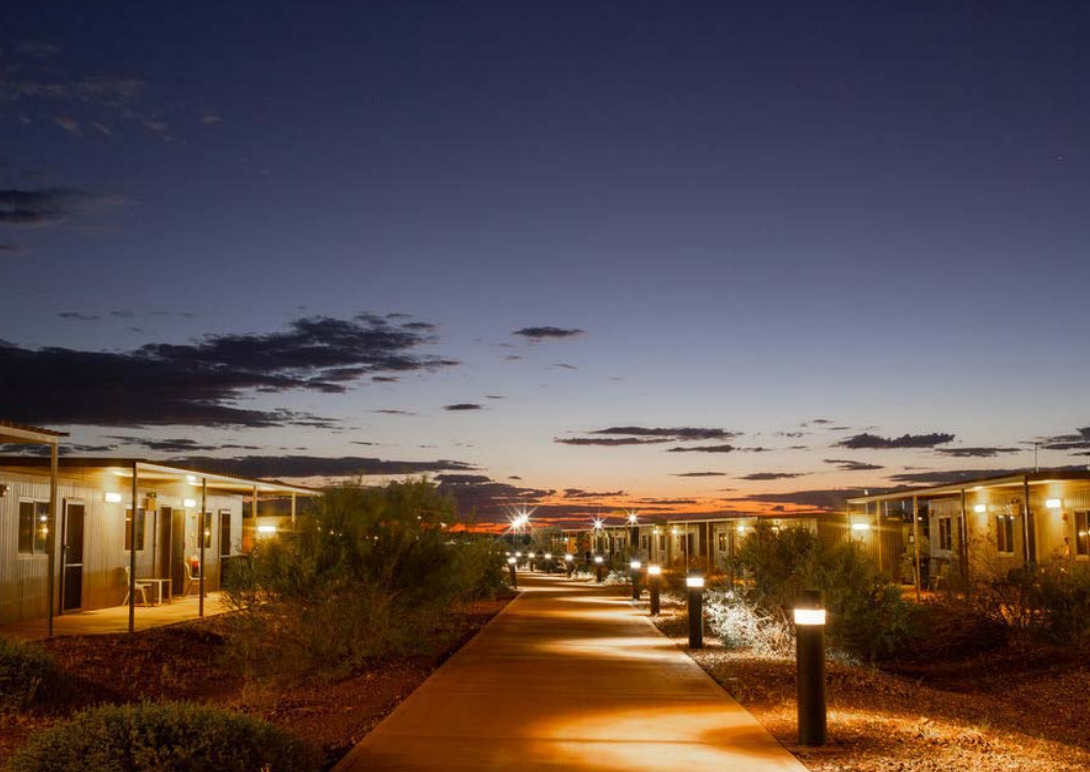 Article by Ray Chan courtesy of the Australian Mining Review

They say hope springs eternal, and by all accounts, Hope Downs is looking at optimistic times in the Twake of record iron ore prices and challenging COVID-19 conditions.

GEOLOGY The Hope Downs mines are located in the Hamersley Group in WA’s Pilbara, which forms the middle layer of Mount Bruce Group in the Marra Mamba iron formation.

The section contains rocks dated to the Archaean and Palaeoproterozoic ages, and was mineralised as a result of the volcanic eruption and sedimentary sequence of the Mount Bruce Super Group.

The uppermost Mount Newman Member is 65m thick at Hope Down and hosts major mineralisation.

The Hamersley Range contains 80pc of all identified iron ore reserves in Australia and is one of the world’s major iron ore provinces.

The project leases are estimated to have 1450mt of mineable ore, and the mines to have an expected life of more than 30 years. Hancock Prospecting continues to explore for iron ore deposits and grow its mineral resource inventory though a number of exploration tenements in the Pilbara.

HISTORY The development of Hope Downs traces back to 1992, when Hope Downs iron ore (HDIO), a subsidiary of Hancock Prospecting (HPPL) and part of the Hancock Group, secured a State Agreement for temporary tenements in December that year, nine months after the passing of HPPL founder Lang Hancock.

Based on that more secure title, Hancock was able to progress exploration and evaluation work, then finished a prefeasibility study and commenced a Bankable Feasibility Study under the executive chairmanship of Mr Hancock’s daughter, Gina Rinehart, whose mother Hope was the inspiration for the company name.

In 1998, after a worldwide search, HDIO secured Iscor of South Africa as a partner to help fund the completion of the Hope Downs BFS, given that HPPL then had inadequate money to timely finalise an expensive bankable feasibility study.

However Iscor then unbundled, a process by which a company with several different lines of business retains core businesses while selling off assets, product lines, divisions or subsidiaries.

The partner evolved into Kumba, a smaller and less financially strong company, which later then succumbed to a hostile takeover by Anglo, which had already committed to the South African Government that it would focus its iron ore investments in the Cape country.

Throwing more spanners in the works were various other events, including among other things, negotiations to share infrastructure with BHP Billiton iron ore, and settlement of the Porteous litigation (which involved financial claims for Hope Downs, which needed resolution prior to finance being achievable).

After a successful arbitration, and difficulties with accessing Port Hedland (the then selected port for Hope Downs), on July 1, 2005, Kumba / Anglo was replaced by Rio Tinto Iron Ore, when the company announced an agreement to enter into the Hope Downs Joint Venture (HDJV), a 50/50 joint venture between the two parties.

The involvement of a new partner involved a further selection process and much work, including a major rewrite of the draft development proposal. Production finally kicked off in November 2007, when output from the initial $1.3b Hope Downs mine with an initial capacity of 15mtpa – was achieved with first railing of ore over the new Lang Hancock Railway (named in honour of Mr Hancock) to Dampier.

The zone was developed in two stages, with the first stage increasing the mine’s capacity to 25Mtpa.

Following the success of this first mine, further investment enabled the commencement one year later of its second major mine, Hope South, which increased production capacity to about 31mtpa.

Hope Downs North and Hope Downs South are both primarily Marra Mamba deposits and are distinct deposits that form part of the so-named Hope 1.

Following the achievements at both Hope 1 North and South, Hope Downs 4 (which had had a successful prefeasibility study undertaken by Hancock prior to Rio Tinto’s involvement) was subsequently developed and began production in 2013.

Hope 4 is a Brockman-hosted iron ore deposit located about 30km north of Newman, with a 2016-measured reserve of 162mt, and currently provides production tonnage of about 15mtpa. Hope Downs 4 had a capital cost of about $1.2bn. Rio Tinto provided an additional $425m for connecting the mine to existing rail, power and port infrastructure.

BABY STEPS In 2018, Rio Tinto and Hancock Prospecting opened Baby Hope, a new mine at Hope Downs. An exciting part of the initiative is a commitment from the JV partners towards investment in greater automation, driving productivity and improving safety.

Development of the Baby Hope deposit will help sustain existing capacity at the Hope Downs 1 operation, supporting ongoing jobs at the site.

This deployment will deliver safety benefits to both haulage and drilling operations as well as productivity gains to the business through a higher utilisation rate of the existing fleet. According to Rio Tinto Iron Ore chief executive Chris Salisbury, the investment would ensure sustainable production levels at the Hope Downs 1 operation.

“It’s a clear demonstration of our continuing commitment to the people of WA and the joint venture partnership,” he said. “Together, we have played an instrumental role in developing the Pilbara and remain committed to pioneering new ways to innovate and improve our business for the future.

“As we introduce autonomous technology across the business we continue to work closely with our employees to develop their career pathways. “To date, we have successfully redeployed or upskilled employees impacted by automation and we would expect this trend to continue with the extension of this technology at Hope Downs.” HPPL Group Executive Chairman Gina Rinehart acknowledged the contribution from Rio, saying its participation had offered employment and more indirect employment and opportunities to many Australians over decades.

“Hancock, had over years, completed a feasibility study, albeit with ore destined to go out not on Rio Tinto’s infrastructure, but our money was very limited, and we couldn’t do all we wanted to do at Hope Downs,” she said.

“We needed a bigger company like Rio for investment.” “I hope everyone who has been involved along the way are proud of our industry, and our contribution to the Pilbara and our state that Hope Downs makes.It has changed WA from being a mendicant handout state, which couldn’t support itself, to one which supports other states.” “I am excited that the Baby Hope mine will be a welcome contributor to the future success of Hope Downs.” Ms Rinehart said Hope Downs was very special to Hancock. It was named after a very special and beautiful lady, my mother Hope, a truly wonderful West Australian,” she said.

“My father, Lang Hancock, whose flights of discovery entailed him risking his life many times, was responsible for finding a significant number of major iron ore deposits in the Pilbara, indeed about 10 of which now form major mines for Rio Tinto, plus Hope Downs.” HPPL executive director Tad Watroba, who has been involved in the Hope Downs project since 1991, said the opening of any new mine was always the result of a significant amount of effort and hard work from a team of people.

“Gina Rinehart’s drive, hard work, determination and vision over decades has been essential in developing Hope Downs,” he said. “It was not an easy path for Hancock, a then small company, to complete years of hard work to progress these major mines which make a huge contribution to Australia.” CULTURE CLUB The project has a workforce across a range of cultures and operates with an excellent record in the areas of health and safety. Maintaining these high standards and reliability for its customers are key areas of management focus.

The risks that needed to be overcome – the efforts, focus, hard work, persistence and investment by HPPL and its subsidiary over many years – have built a foundation for many successful projects, which the company expects will hold it in good stead to continue to contribute to the growth of WA and the nation. 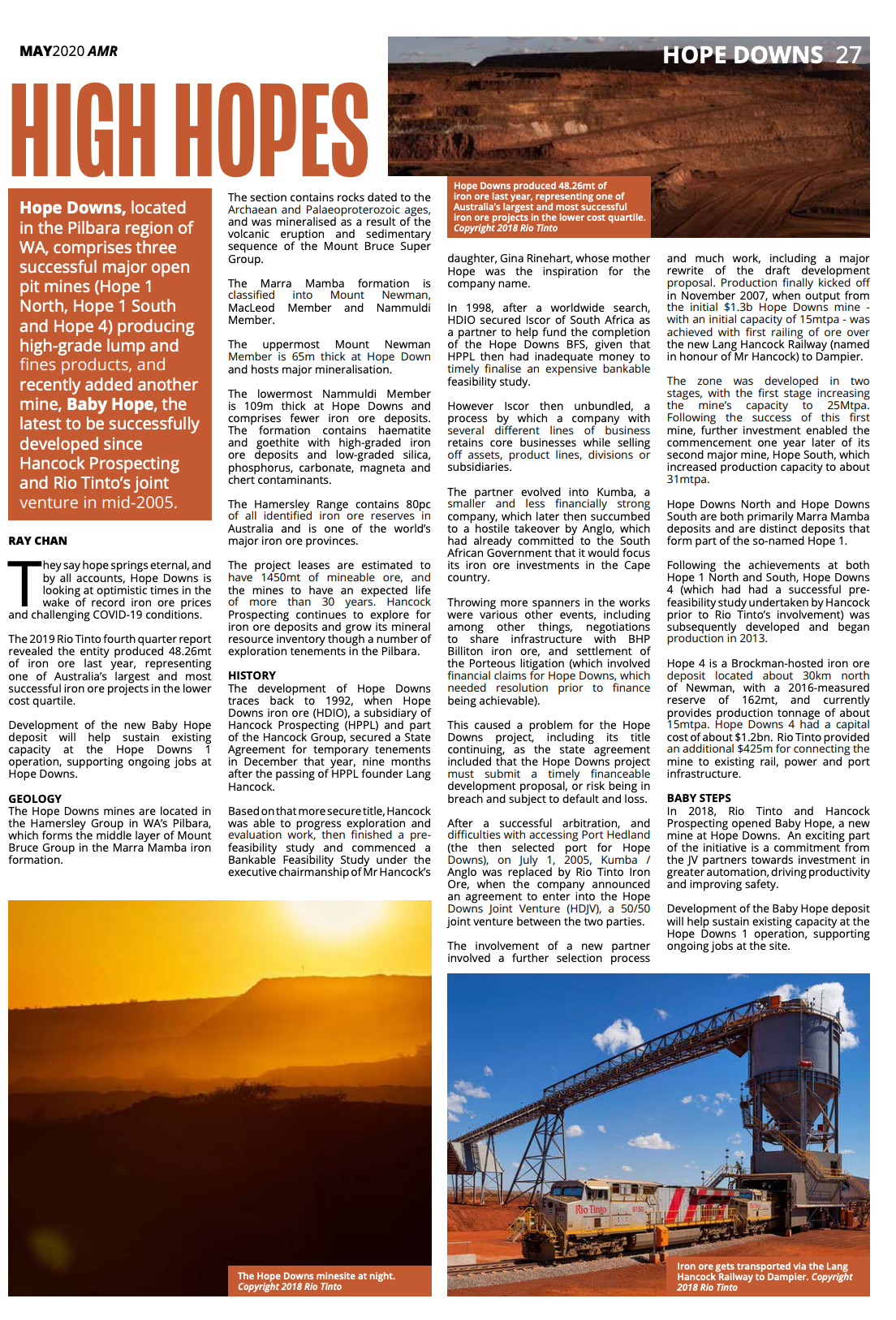 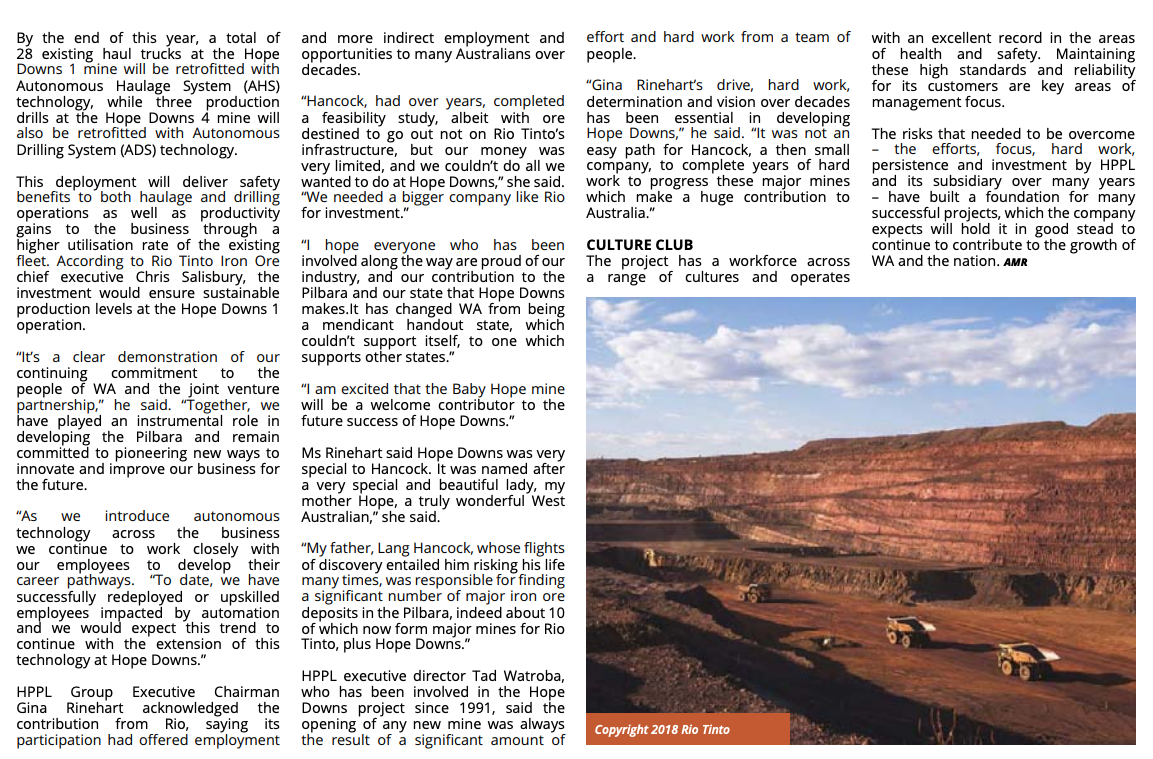