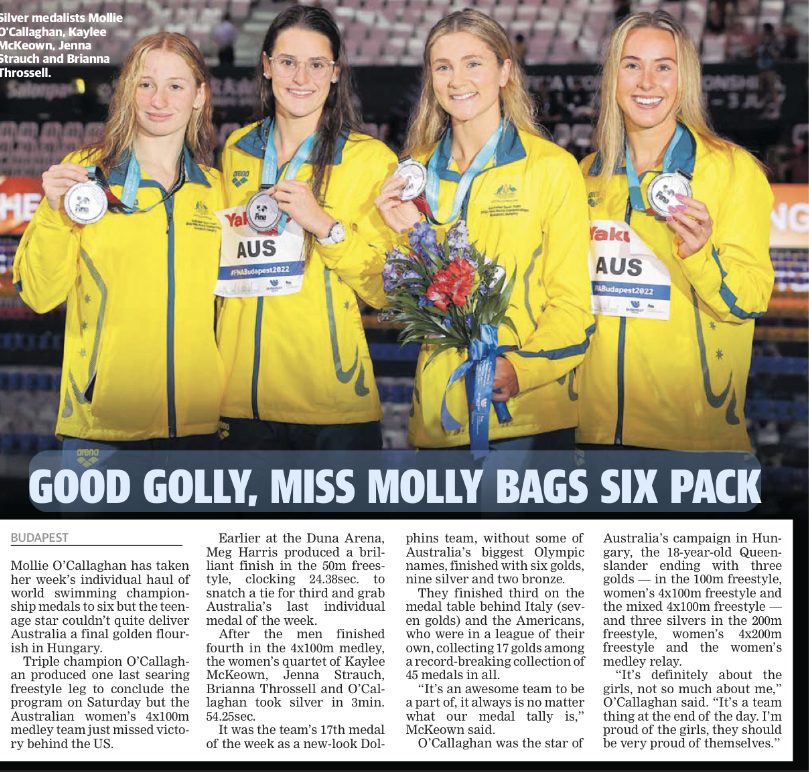 Mollie O’Callaghan has taken her week’s individual haul of world swimming championship medals to six but the teenage star couldn’t quite deliver Australia a final golden flourish in Hungary.

Triple champion O’Callaghan produced one last searing freestyle leg to conclude the program on Saturday but the Australian women’s 4x100m medley team just missed victory behind the US.

Earlier at the Duna Arena, Meg Harris produced a brilliant finish in the 50m freestyle , clocking 24.38sec. to snatch a tie for third and grab Australia’s last individual medal of the week.

After the men finished fourth in the 4x100m medley, the women’s quartet of Kaylee McKeown, Jenna Strauch, Brianna Throssell and O’Callaghan took silver in 3min. 54.25sec.

It was the team’s 17th medal of the week as a new-look Dolphins team, without some of Australia’s biggest Olympic names, finished with six golds, nine silver and two bronze.

They finished third on the medal table behind Italy (seven golds) and the Americans, who were in a league of their own, collecting 17 golds among a record-breaking collection of 45 medals in all.

“It’s an awesome team to be a part of, it always is no matter what our medal tally is,” McKeown said.

“It’s definitely about the girls, not so much about me,” O’Callaghan said. “It’s a team thing at the end of the day. I’m proud of the girls, they should be very proud of themselves.”