Article by Charlotte Elton courtesy of the West Australian. 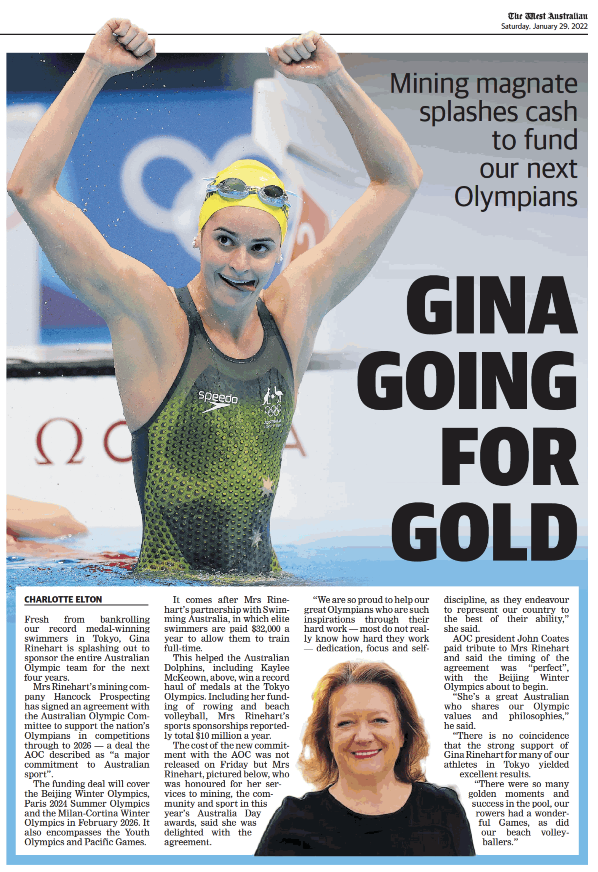 Fresh from bankrolling our record medal-win ning swimmers in Tokyo, Gina Rinehart is splashing out to sponsor the entire Australian Olympic team for the next four years.

Mrs Rinehart’s mining company Hancock Prospecting has signed an agreement with Australian Olympic Committee to support the nation’s Olympians in competitions through to 2026 a deal the AOC described as “a major commitment to Australian sport”.

It follows on from Mrs Rinehart’s partnership with the Swimming Australia, paying elite swimmers $32,000 a year to allow them to train full-time, which helped the Australian Dolphins, including Kaylee McKeown, pictured, collect a record medal haul at the Tokyo Olympics. Along with rowing and beach volleyball, Mrs Rinehart’s sports sponsorships reportedly totalled $10 million a year.

The cost of the new commitment with the AOC was not released on Friday but Mrs Rinehart, pictured below, who was honoured for her services to mining, the community and sport in this year’s Australia Day awards, said she was delighted with the agreement.

“We are so proud to help our great Olympians who are such inspirations through their hard work most do not really know how hard they work dedication, focus and self-discipline, as they endeavour to represent our country to the best of their ability,” she said.

AOC president John Coates paid tribute to Mrs Rinehart and said the timing of the agreement was “perfect,” with the Beijing Winter Olympics about to begin.

“She’s a great Australian who shares our Olympic values and philosophies,” he said. “There is no coincidence that the strong support of Gina Rinehart for many of our athletes in Tokyo yielded excellent results.

There were so many golden moments and success in the pool, our rowers had a wonderful Games, as did our beach volleyballers.”