GINA DIPS IN FOR GAMES

Article by Ando’s Shout courtesy of the Sunday Herald Sun

THEY made an unlikely pair on Melbourne Cup day last year, Australia’s richest woman and a politely-spoken budding Olympic rower.

It came about when GINA RINEHART expressed a desire to go to the Cup and a request came via Rowing Australia for one of the rowers she so generously sponsors to accompany her.

Stand up SIMON KEENAN, 27, whose Olympic dream is on hold until 2021 when he hopes to be in the first Australian eight to win Olympic gold.

Keenan knows his way around the Flemington racetrack courtesy of his father, PETER “Crackers” KEENAN, who combined strapping for BART CUMMINGS in the 1970s with playing as first ruck for North Melbourne in its 1977 premiership side.

Keenan is typical of rowers in this country, an elite sportsperson whose earnings are poles apart from the $370,000-a-year the average AFL player pockets. That’s where Rinehart comes in.

“Gina Rinehart has been incredibly generous to sports like rowing, swimming and volleyball,” Keenan said.

“Where the federal government funding has fallen short, she has helped out.

Without our patron in Gina we wouldn’t have the training facilities we have. And she is a part of the team in that she is a regular face at regattas.

“We had a great time in the Birdcage at the races.

Everyone recognised Gina and two people knew me, both of whom were old school mates from Xavier!” 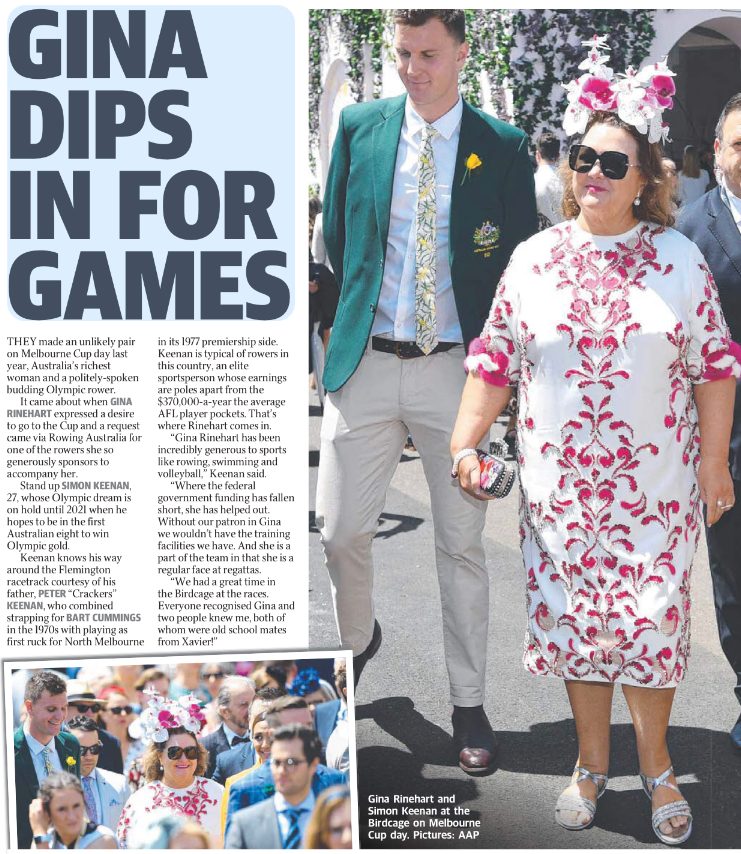