Article by Julian Linden courtesy of the Daily Telegraph. 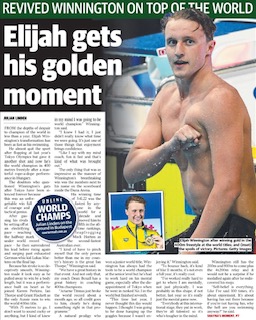 FROM the depths of despair to champion of the world in less than a year, Elijah Winnington’s transformation has been as fast as his swimming.

He almost quit the sport after flopping at last year’s Tokyo Olympics but gave it another shot and now he’s the world champion in 400 metres freestyle after a masterful rope-a-dope performance in Hungary.

The doubters who questioned Winnington’s guts after Tokyo have been silenced forever because this was an unforgettable win full of courage and tactical genius.

After gassing his rivals by setting off at an electrifying pace – reaching the halfway mark under world record pace – he then surrendered his lead before rising again and surging past exhausted German whiz kid Lukas Martens on the final lap.

Because his stroke is so deceptively smooth, Winnington made it look easy as he pulled away to win by a body length, but it was a performance built on heart as he joined Kieren Perkins, Ian Thorpe and Grant Hackett as the only Aussie men to win the world 400m title.

“With 75 metres to go, I don’t want to sound cocky or anything, but I kind of knew in my mind I was going to be world champion.” Winnington said.

“I knew I had it, I just didn’t really know what time we were going. It’s just one of those things that enjoyment brings confidence.

“Like I say with my mind coach, fun is fast and that’s kind of what was brought out.”

The only thing that was as impressive as the manner of Winnington’s breathtaking win was the numbers next to his name on the scoreboard inside the Duna Arena.

His winning time of 3:41.22 was the fastest by anyone in the world for a decade and moved him to fifth in the all-time rankings, leapfrogging Mack Horton as the second-fastest Australian ever.

“I kind of have to pinch myself that the only person better than me in my country’s history is the great Ian Thorpe,” Winnington said.

“Ariarne Titmus just broke the world record about a month ago, so all credit goes to him, clearly he’s doing something right in that programme.”

A natural prodigy who won a junior world title, Winnington has always had the tools to be a world champion at the senior level but he’s had to work hard on his mental game, especially after the disappointment of Tokyo when he went in ranked No. 1 in the world but finished seventh.

“This time last year, I never thought this day would happen. I thought I was going to be done hanging up the goggles because I wasn’t enjoying it,” Winnington said.

“To bounce back, it’s kind of like 11 months, it’s not even a full year, it’s really cool.

“I’ve worked really hard to get to where I am mentally, not just physically. I was probably in this shape, if not better, last year so it’s really just the mental game now.

“Everybody at this international stage, they put in work, they’re all talented so it’s who’s tougher in the mind.

Winnington still has the 200m and 800m to come plus the 4x200m relay and it would not be a surprise if he medalled again after he rediscovered his mojo.

“Self-belief is everything. Like I’ve said 100 times, it’s about enjoyment. It’s about having fun out there because if you’re not having fun, why the hell are you swimming anyway?” he said.

FROM the depths of despair to champion of the world in less than a year, Elijah Winnington’s transformation has been as fast as his swimming.