Editorial courtesy of the Australian. 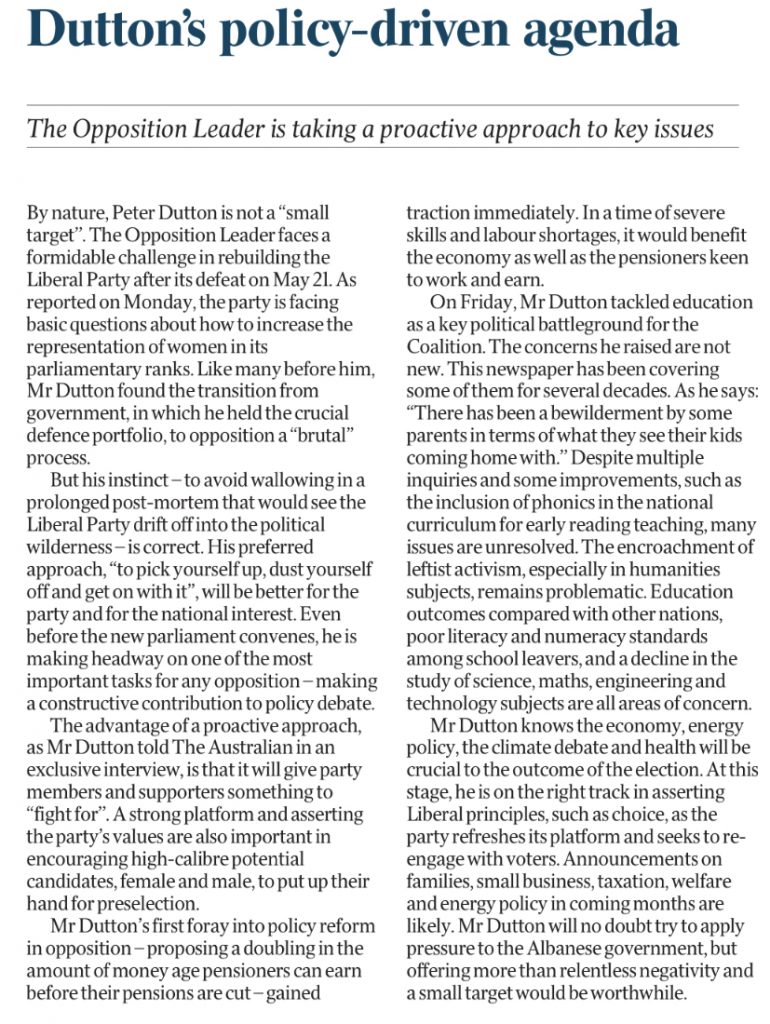 By nature, Peter Dutton is not a “small target’’. The Opposition Leader faces a formidable challenge in rebuilding the Liberal Party after its defeat on May 21. As reported on Monday, the party is facing basic questions about how to increase the representation of women in its parliamentary ranks. Like many before him, Mr Dutton found the transition from government, in which he held the crucial defence portfolio, to opposition a “brutal” process.

But his instinct – to avoid wallowing in a prolonged post-mortem that would see the Liberal Party drift off into the political wilderness – is correct. His preferred approach, “to pick yourself up, dust yourself off and get on with it’’, will be better for the party and for the national interest. Even before the new parliament convenes, he is making headway on one of the most important tasks for any opposition – making a constructive contribution to policy debate.

The advantage of a proactive approach, as Mr Dutton told The Australian in an exclusive interview, is that it will give party members and supporters something to “fight for’’. A strong platform and asserting the party’s values are also important in encouraging high-calibre potential candidates, female and male, to put up their hand for preselection.

Mr Dutton’s first foray into policy reform in opposition – proposing a doubling in the amount of money age pensioners can earn before their pensions are cut – gained traction immediately. In a time of severe skills and labour shortages, it would benefit the economy as well as the pensioners keen to work and earn.

On Friday, Mr Dutton tackled education as a key political battleground for the Coalition. The concerns he raised are not new. This newspaper has been covering some of them for several decades. As he says: “There has been a bewilderment by some parents in terms of what they see their kids coming home with.’’ Despite multiple inquiries and some improvements, such as the inclusion of phonics in the national curriculum for early reading teaching, many issues are unresolved. The encroachment of leftist activism, especially in humanities subjects, remains problematic. Education outcomes compared with other nations, poor literacy and numeracy standards among school leavers, and a decline in the study of science, maths, engineering and technology subjects are all areas of concern.

Mr Dutton knows the economy, energy policy, the climate debate and health will be crucial to the outcome of the election. At this stage, he is on the right track in asserting Liberal principles, such as choice, as the party refreshes its platform and seeks to re-engage with voters. Announcements on families, small business, taxation, welfare and energy policy in coming months are likely. Mr Dutton will no doubt try to apply pressure to the Albanese government, but offering more than relentless negativity and a small target would be worthwhile.