Don’t tell kids what to think

Article by Gemma Tognini courtesy of the West Australian. 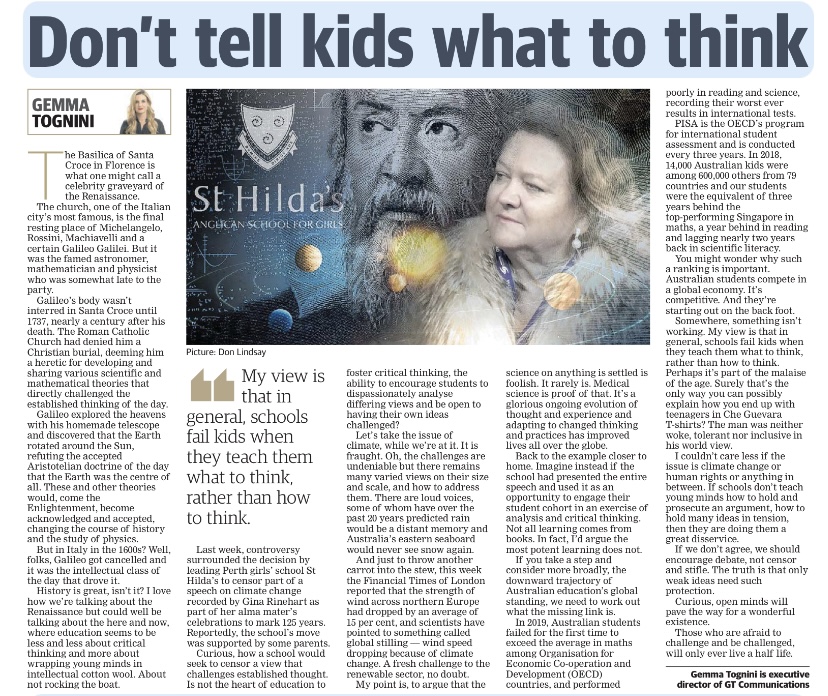 The Basilica of Santa Croce in Florence is what one might call a celebrity graveyard of the Renaissance.

The church, one of the Italian city’s most famous, is the final resting place of Michelangelo, Rossini, Machiavelli and a certain Galileo Galilei. But it was the famed astronomer, mathematician and physicist who was somewhat late to the party.

Galileo’s body wasn’t interred in Santa Croce until 1737, nearly a century after his death. The Roman Catholic Church had denied him a Christian burial, deeming him a heretic for developing and sharing various scientific and mathematical theories that directly challenged the established thinking of the day.

Galileo explored the heavens with his homemade telescope and discovered that the Earth rotated around the Sun, refuting the accepted Aristotelian doctrine of the day that the Earth was the centre of all. These and other theories would, come the Enlightenment, become acknowledged and accepted, changing the course of history and the study of physics.

But in Italy in the 1600s? Well, folks, Galileo got cancelled and it was the intellectual class of the day that drove it.

History is great, isn’t it? I love how we’re talking about the Renaissance but could well be talking about the here and now, where education seems to be less and less about critical thinking and more about wrapping young minds in intellectual cotton wool. About not rocking the boat.

Last week, controversy surrounded the decision by leading Perth girls’ school St Hilda’s to censor part of a speech on climate change recorded by Gina Rinehart as part of her alma mater’s celebrations to mark 125 years.

Reportedly, the school’s move was supported by some parents.

Curious, how a school would seek to censor a view that challenges established thought.

Is not the heart of education to foster critical thinking, the ability to encourage students to dispassionately analyse differing views and be open to having their own ideas challenged?

Let’s take the issue of climate, while we’re at it. It is fraught. Oh, the challenges are undeniable but there remains many varied views on their size and scale, and how to address them. There are loud voices, some of whom have over the past 20 years predicted rain would be a distant memory and Australia’s eastern seaboard would never see snow again.

And just to throw another carrot into the stew, this week the Financial Times of London reported that the strength of wind across northern Europe had dropped by an average of 15 per cent, and scientists have pointed to something called global stilling wind speed dropping because of climate change. A fresh challenge to the renewable sector, no doubt.

My point is, to argue that the science on anything is settled is foolish. It rarely is. Medical science is proof of that. It’s a glorious ongoing evolution of thought and experience and adapting to changed thinking and practices has improved lives all over the globe.

Back to the example closer to home. Imagine instead if the school had presented the entire speech and used it as an opportunity to engage their student cohort in an exercise of analysis and critical thinking.

Not all learning comes from books. In fact, I’d argue the most potent learning does not.

If you take a step and consider more broadly, the downward trajectory of Australian education’s global standing, we need to work out what the missing link is.

In 2019, Australian students failed for the first time to exceed the average in maths among Organisation for Economic Co-operation and Development (OECD) countries, and performed poorly in reading and science, recording their worst ever results in international tests.

PISA is the OECD’s program for international student assessment and is conducted every three years. In 2018, 14,000 Australian kids were among 600,000 others from 79 countries and our students were the equivalent of three years behind the top-performing Singapore in maths, a year behind in reading and lagging nearly two years back in scientific literacy.

You might wonder why such a ranking is important.

Australian students compete in a global economy. It’s competitive. And they’re starting out on the back foot.

Somewhere, something isn’t working. My view is that in general, schools fail kids when they teach them what to think, rather than how to think.

Perhaps it’s part of the malaise of the age. Surely that’s the only way you can possibly explain how you end up with teenagers in Che Guevara T-shirts? The man was neither woke, tolerant nor inclusive in his world view.

I couldn’t care less if the issue is climate change or human rights or anything in between. If schools don’t teach young minds how to hold and prosecute an argument, how to hold many ideas in tension, then they are doing them a great disservice.

If we don’t agree, we should encourage debate, not censor and stifle. The truth is that only weak ideas need such protection.

Curious, open minds will pave the way for a wonderful existence.

Those who are afraid to challenge and be challenged, will only ever live a half life.

Gemma Tognini is executive director of GT Communications My view is that in general, schools fail kids when they teach them what to think, rather than how to think.