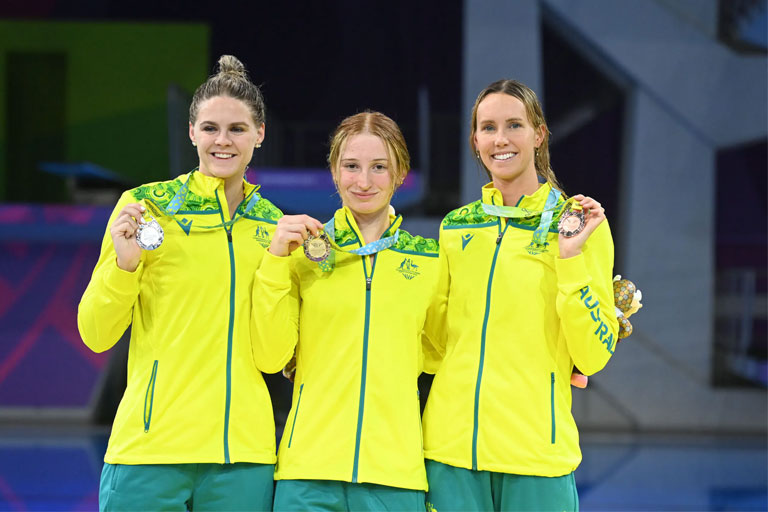 In what was a history-making night in Birmingham, the Australian Swimming team picked up a staggering 17 medals, six of which were gold.

Chelsea Hodges (1:07.05) claimed the first podium finish of the night for the Aussies, finishing third in the Women’s 100m Breastroke. It was a strong Aussie line up, with Abbey Harkin (1:07.47) in fifth and Jenna Strauch (1:07.60) finishing sixth.

“It feels amazing – it was so good to execute that race when I needed to, I’m so happy,” Dekkers said.

“Even though I was going in as the fastest qualifier, I didn’t put any expectation on myself and I’m just so amazed to come out with the win.”

The Aussies made a clean sweep of the podium in the Women’s 100m Freestyle. Mollie O’Callaghan (52.94) picked up her fourth gold medal of the Birmingham 2022 Commonwealth Games, Shayna Jack (52.88) with silver and Emma McKeon (52.94) rounding out the podium winning bronze.

“I’m extremely happy. It’s still sinking in, but I’ve definitely still got a long way to improve. This is just the beginning for me,” O’Callaghan said.

“It’s amazing to race alongside her (Emma McKeon), she’s such an inspirational swimmer and her achievements are just outstanding.”

It was a dead heat in the Men’s 100m Butterfly, with Australian Dolphin Matthew Temple (51.40) and England’s James Guy both earning a silver medal. Cody Simpson (52.06) finished fifth in his first Commonwealth Games.

“I look back to four years ago, I was just a kid from a dairy farm and now here I am in Birmingham representing my country and not only doing that but winning gold.

“It’s unbelievable and I couldn’t ask for anything more.”

Ariarne Titmus (8:13.59) set a new Games Record in the Women’s 800m Freestyle to win her third gold medal of the meet. Australia claimed their second clean sweep of the night, with Commonwealth Games debutant Kiah Melverton (8:16.79) finishing second and Lani Pallister (8:19.16) rounding out the podium in third.

The Australian team of Kaylee McKeown, Zac Stubblety-Cook, Matthew Temple and Emma McKeon (3:41.30) closed out one of Australia’s most successful nights in the pool with a gold medal, winning the first ever Mixed 4 x 100m Medley Relay event.