Article by Daniel Wild courtesy of the West Australian 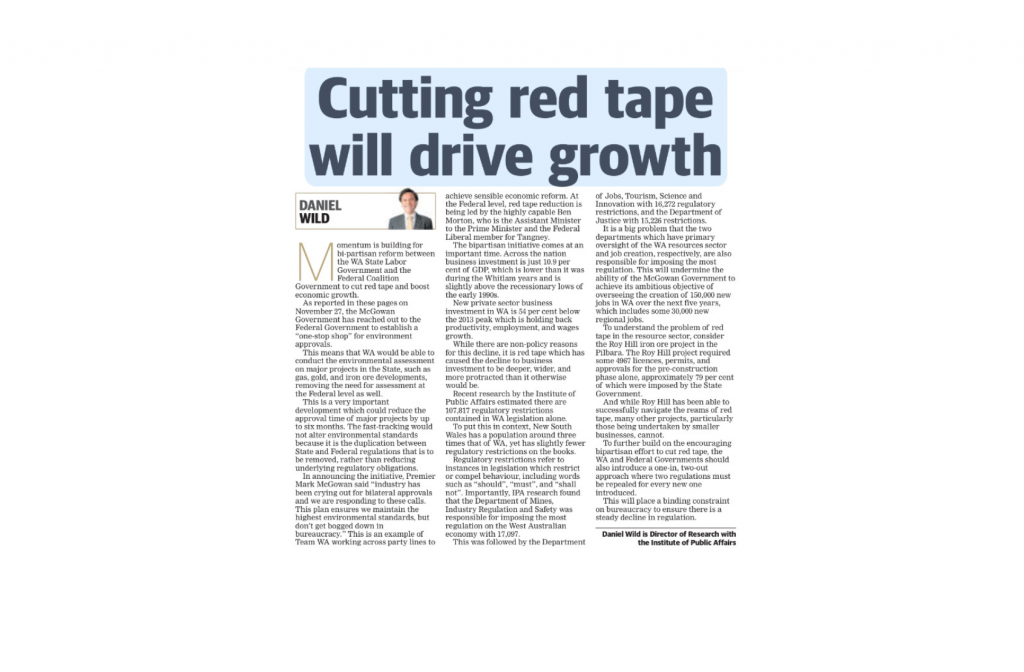 Momentum is building for bi-partisan reform between the WA State Labor Government and the Federal Coalition Government to cut red tape and boost economic growth.

As reported in these pages on November 27, the McGowan Government has reached out to the Federal Government to establish a “one-stop shop” for environment approvals.

This means that WA would be able to conduct the environmental assessment on major projects in the State, such as gas, gold, and iron ore developments, removing the need for assessment at the Federal level as well.

This is a very important development which could reduce the approval time of major projects by up to six months. The fast-tracking would not alter environmental standards because it is the duplication between State and Federal regulations that is to be removed, rather than reducing underlying regulatory obligations.

In announcing the initiative, Premier Mark McGowan said “industry has been crying out for bilateral approvals and we are responding to these calls.

This plan ensures we maintain the highest environmental standards, but don’t get bogged down in bureaucracy.” This is an example of Team WA working across party lines to achieve sensible economic reform. At the Federal level, red tape reduction is being led by the highly capable Ben Morton, who is the Assistant Minister to the Prime Minister and the Federal Liberal member for Tangney.

The bipartisan initiative comes at an important time. Across the nation business investment is just 10.9 per cent of GDP, which is lower than it was during the Whitlam years and is slightly above the recessionary lows of the early 1990s.

New private sector business investment in WA is 54 per cent below the 2013 peak which is holding back productivity, employment, and wages growth.

While there are non-policy reasons for this decline, it is red tape which has caused the decline to business investment to be deeper, wider, and more protracted than it otherwise would be.

Recent research by the Institute of Public Affairs estimated there are 107,817 regulatory restrictions contained in WA legislation alone.

To put this in context, New South Wales has a population around three times that of WA, yet has slightly fewer regulatory restrictions on the books.

Regulatory restrictions refer to instances in legislation which restrict or compel behaviour, including words such as “should”, “must”, and “shall not”. Importantly, IPA research found that the Department of Mines, Industry Regulation and Safety was responsible for imposing the most regulation on the West Australian economy with 17,097.

It is a big problem that the two departments which have primary oversight of the WA resources sector and job creation, respectively, are also responsible for imposing the most regulation. This will undermine the ability of the McGowan Government to achieve its ambitious objective of overseeing the creation of 150,000 new jobs in WA over the next five years, which includes some 30,000 new regional jobs.

To understand the problem of red tape in the resource sector, consider the Roy Hill iron ore project in the Pilbara. The Roy Hill project required some 4967 licences, permits, and approvals for the pre-construction phase alone, approximately 79 per cent of which were imposed by the State Government.

And while Roy Hill has been able to successfully navigate the reams of red tape, many other projects, particularly those being undertaken by smaller businesses, cannot.

To further build on the encouraging bipartisan effort to cut red tape, the WA and Federal Governments should also introduce a one-in, two-out approach where two regulations must be repealed for every new one introduced.

This will place a binding constraint on bureaucracy to ensure there is a steady decline in regulation.