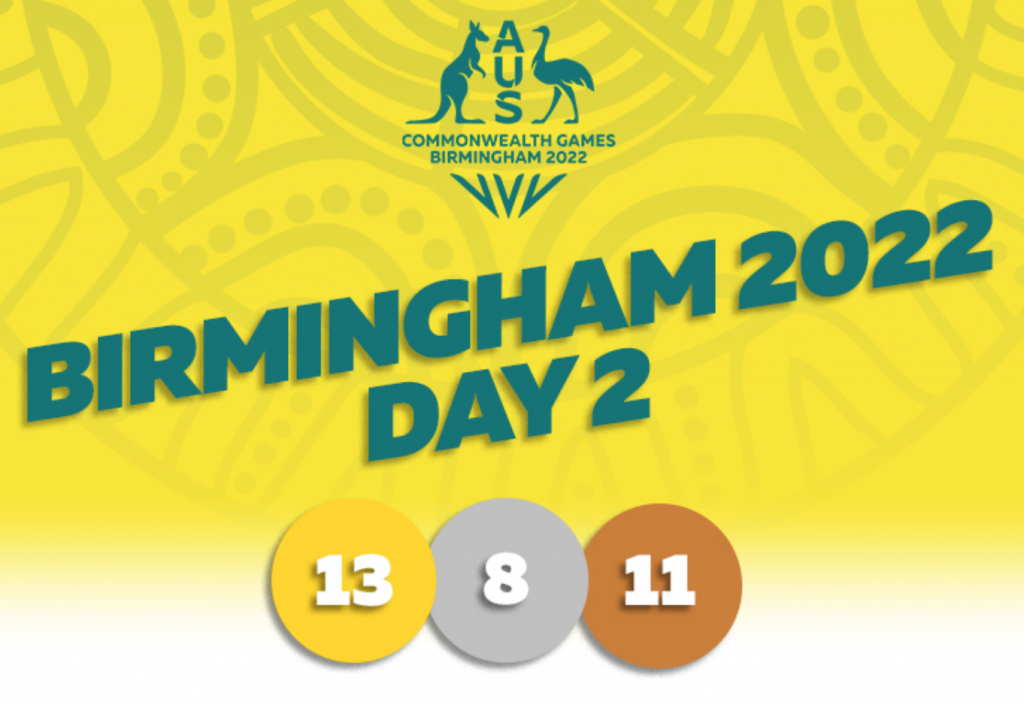 Another sensational day of action in Birmingham, with Australia winning five gold medals with victories in the pool and the marathons. Our Aussie athletes captured a further 11 medals on Day 2 to solidify top spot on the medal tally.

Jess Stenson dominated the women’s marathon, crossing the line in a blistering time of 2:27:31 to claim gold with son, Billy cheering her on from the sidelines. Fellow ‘marathon mums’ Eloise Wellings and Sinead Diver dug deep, coming home in fourth and fifth place respectively.

After setting the pace early and leading the pack for 25 kilometres, Melbourne’s Liam Adams finished just shy of a podium position with a season best time of 2:13:23. Hot on his heels was Bendigo’s Andy Buchanan who entered Victoria Square in seventh place in a time of 2:15:40.

It was another gold rush for the Aussies at the Sandwell Aquatic Centre, with a haul of three gold medals. Katja Dedekind set the first world record in the pool when she powered home to win the women’s 50m freestyle S13 final, while teammate Kirralee Hayes claimed bronze.

Six-time Games representative Jian Fang Lay led the charge in the women’s table tennis team to power Australia to another convincing win and storm into the quarter-finals. She combined with Minhyung Jee to win both matches, finishing the day with a come-from-behind victory over Canada.

Our Hockeyroos took to the field for their first match and scored a stunning victory over Kenya (8-0).

On the squash court, Jess Turnbull made her Commonwealth Games debut with a win, while the Diamonds posted their second commanding victory in as many days, with a thumping 53 goal win over Scotland (83-30).

In badminton, Australia’s mixed team gave top seed India an almighty scare serving it up to the defending champion, but in the end, India was too strong.

Daniel Johnson’s perfect shooting led the men’s 3×3 basketball team to a win over Trinidad & Tobago (21-7), while the men’s beach volleyball team of Chris McHugh and Paul Burnett claimed victory in their first match.

Aussie featherweight boxer Charlie Senior won his first bout on points, defeating Nauru’s Christon Amram in the round of 32.

Lawn bowler Ellen Ryan revived her Commonwealth Games singles campaign with a sensational comeback 21-17 to win over Canada’s Jordan Kos, while Australia’s para-women’s pairs remain unbeaten in their pool games with wins over South Africa (18-7) and New Zealand (19-8). Australia’s para-men’s pairs team rallied for a 21-15 win over Scotland while the men’s triples team of beat Jersey 15-14 to complete a 3-0 sweep of their group.

The action continues tonight for Day 3 live on 7Plus from 5.30pm AEST. 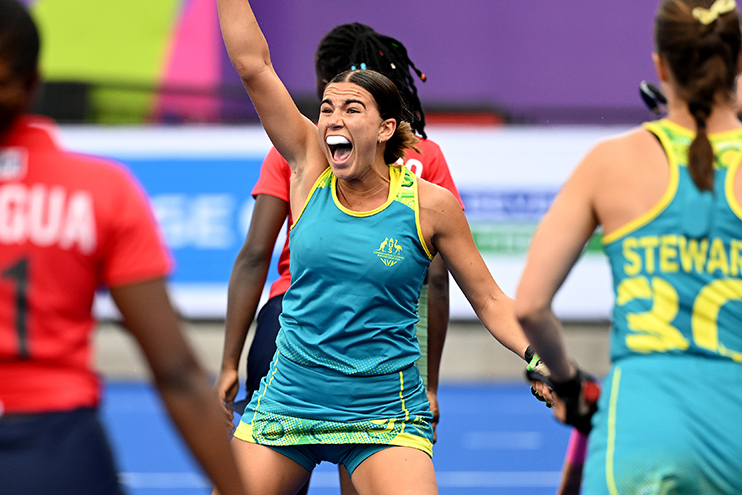 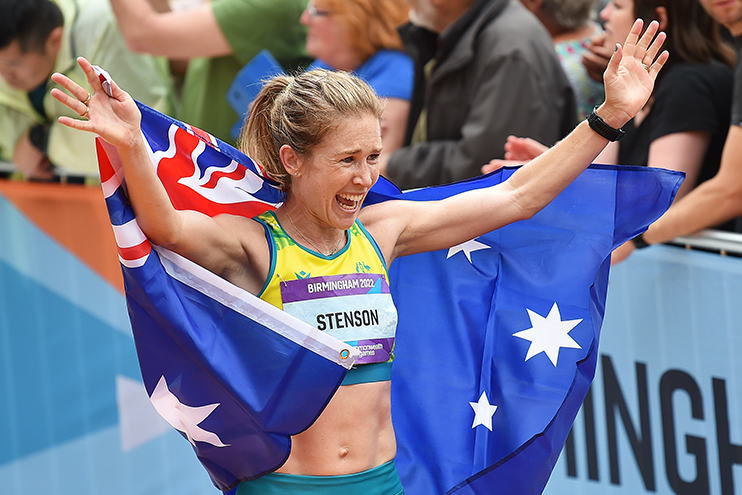 Jessica Stenson has made Commonwealth marathon history, as Australia made a flying start to the athletics program in Birmingham. 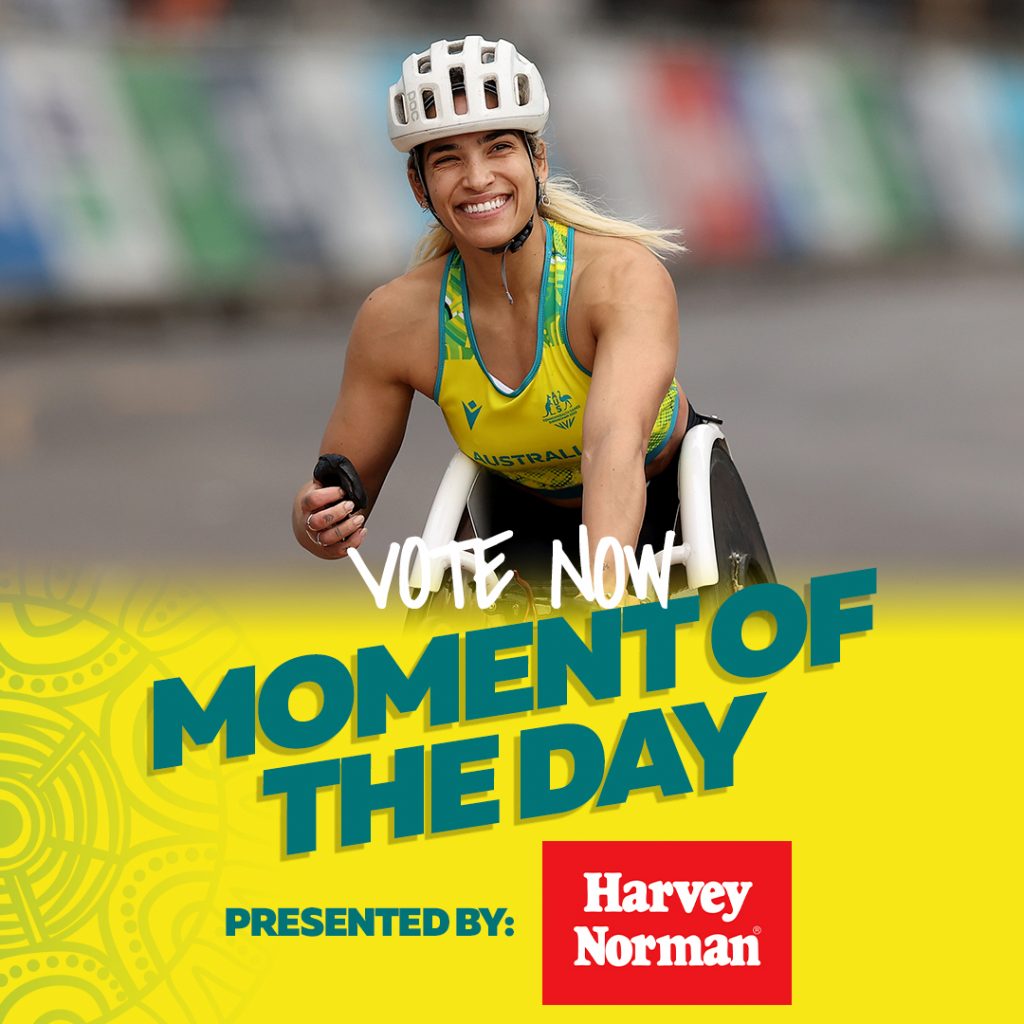 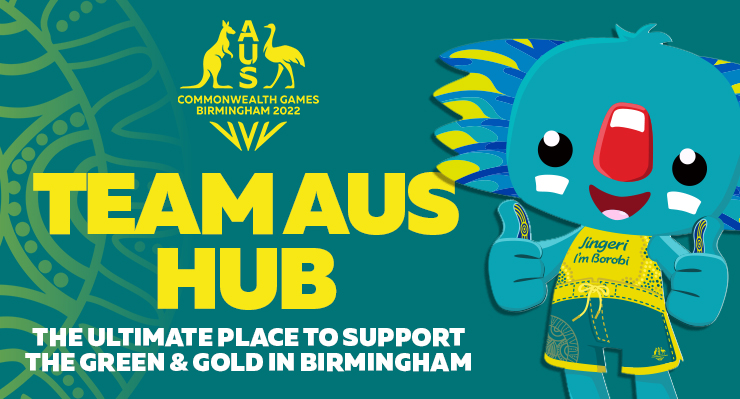