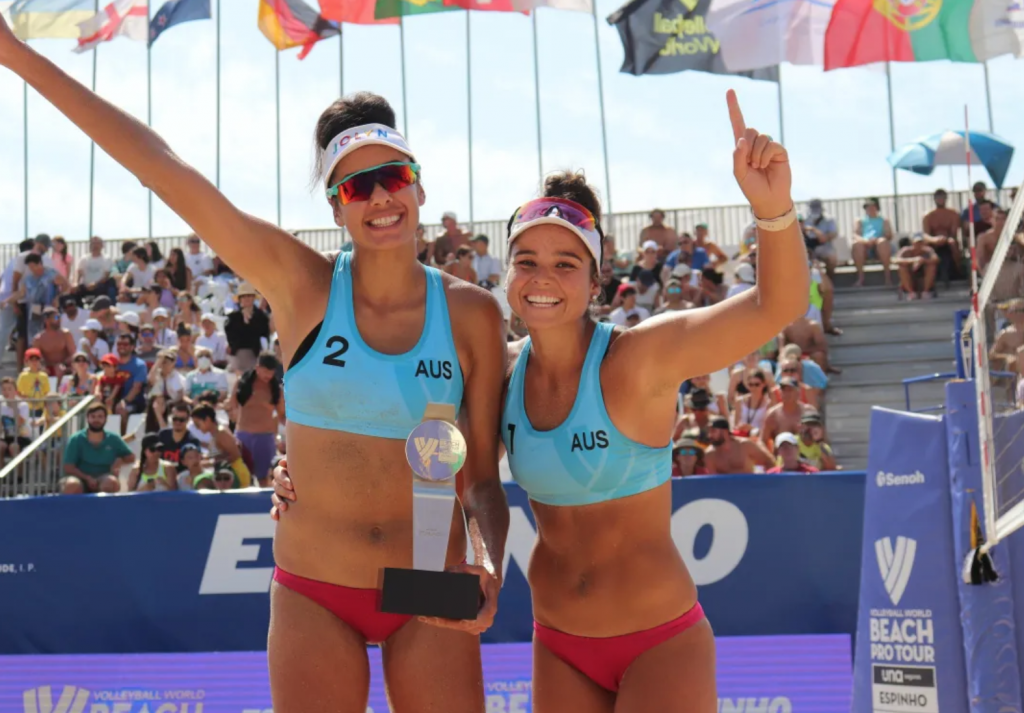 Their victory came in the same location as one four years ago, in the first year of their partnership on the World Tour, which the Australians consider their first big victory as teammates.

To stand on top of the podium in Espinho again this week, the Birmingham 2022 Commonwealth Games bound team had to grind and come from behind to defeat Americans Corinne Quiggle and Sarah Schermerhorn in the three-set (19-21, 21-19, 15-12) gold medal match.

The victory in Espinho is the first for the Australians on the 2022 Beach Pro Tour, following a silver medal at the Kuşadası Challenge in May, and a bronze medal at last week’s Gstaad Elite16. Clancy and Artacho del Solar have finished in the top ten in each of the seven events they have played in so far this season and are currently ranked fifth in the FIVB World Rankings.

“This is our second time in Espinho and our second victory in Espinho, so we’re really grateful,” Clancy said.

“It’s really testing conditions, but it’s also great to play on a beach. We’re very happy that we played a good match against the Americans, they definitely made us sweat.

“Last week we were third in Gstaad and it’s great that we got to win this week,” she said.

But it was in the second set that the Australians came out firing, and despite some push back from the Americans, Clancy and Artacho del Solar were able to claim the win 21-19.

The Australians carried the good momentum into the third set and were quickly able to push ahead of their American opponents. Clancy sealed the win for the Aussies, hitting one straight down into the American court to win 15-12.

“We always come here to win. We knew the Americans were a great team, but we had never played them, so we made sure we brought our A-game,” Artacho del Solar said.

“It was definitely a tough one, but we’re so happy that we got the win. I’m very proud of our team, we showed grit and a lot of fight.

“We had our ups and downs during the week, but we stuck together and that’s how we made it,” she said.

The Volleyball World Beach Pro Tour will feature another Challenge tournament next week, when the tour moves to Africa for the first time, for four days of competition in Agadir, Morocco.

It will be the final Beach Pro Tour event for the Aussies before they head to England for the Birmingham 2022 Commonwealth Games.