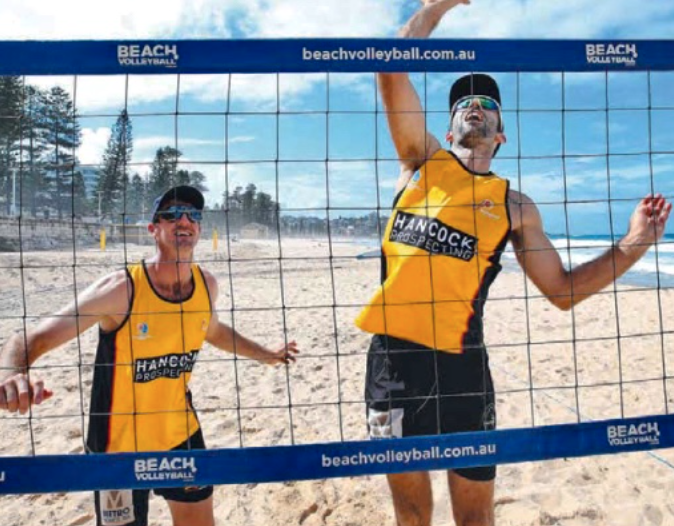 A PANDEMIC pause and stints spent truck driving and school teaching have primed Chris McHugh and Damien Schumann for a last-ditch attempt at the Tokyo Olympics. McHugh and Schumann, who won beach volleyball’s first gold medal in the Commonwealth Games on the Gold Coast, took out the men’s crown at last weekend’s Australian Beach Volleyball Championships in Manly. And in doing so sent a message not to just their international opponents but to Australia’s professional sporting stars.

“A few AFL players should go and do a week’s work somewhere and then they might stop whinging about having to be on holidays on the Gold Coast,” Schumann, 33, said. “There’s nothing we wouldn’t do to be at the Tokyo Olympics and as for all the athletes I hear whinging about going into a hub – give it a rest. “Our whole competitive lives are spent overseas on tour, we go away for two to three months at a time. “What’s two weeks in quarantine to make sure everyone is safe and the Games can go on.”

As part of the Olympic playbook released earlier this month, which in- advice from the World Health Organisation, singing and chanting will be banned at Tokyo. Athletes will be tested every four days and competitors will be expected to take a coronavirus test 72 hours before their departure for Tokyo and show negative result on arrival. There are no guarantees that fans will be able to attend and coaches, support staff and athletes have been told to clap rather than any vocal or physical displays of encouragement.

Which in the disco-inspired hedonistic atmosphere of beach volleyball is an alien ask. Additionally, at Tokyo’s beach volleyball venue Shiokaze Park, balls will be wiped down with disinfectant in between games. McHugh added: “We’re just so lucky to be playing at the moment. We have to do what we have to do to keep everyone safe.” “But it’s going to be hard not to scream and shout, it will actually be a massive challenge – it’s the Olympic Games!”

The Adelaide pairing is yet to qualify for the Games, they must win the Continental Cup in China in June to qualify as there is only one spot up for grabs in Asia. McHugh said:“The break has been good for us. I’ve had a couple of knee surgeries since Gold Coast and it’s allowed me to manage that better. “Physically it’s the best I’ve been for a long time. “And I’ve seen my son Jack start to crawl and talk … it’s been amazing to be there for those big moments .” Rio Olympians Mariafe Artacho del Solar and Taliqua Clancy, considered one of the best players in the world, won the women’s crown at last weekend’s nationals.

The pair’s stunning success on the world stage, a world championship bronze medal and 11 world tour medals from 22 FIVB events, has started whispers of the first Olympic beach volleyball medal since Natalie Cook and Kerri Pottharst. Clancy, 28, and Del Solar, 27, relocated to Queensland in July as the women’s program moved north from Adelaide. “I definitely feel like Mariafe and I can be on top of the podium in Japan,” Clancy said. “We weren’t at our best at the world champs with Mariafe getting injured, there’s more room for improvement so I don’t think we need to find a magic secret because we have it. “But in a way I think we are all starting from scratch in Tokyo. “We can’t compare results because no one is competing – and that’s exciting , it’s an open field. Del Solar added: “We are looking to go to Europe in May or June but usually everyone is playing each other every week on the world tour.” “But our biggest strength is that we have a good connection on court, we trust and understand each other.” The final of the Australian Beach Volleyball Tour will be held at Coolangatta Beach, Gold Coast, from 12-14 March 2021