BRUTAL REGIME THAT PRODUCED A WORLD-BEATER

Article by Julian Linden courtesy of the Courier Mail. 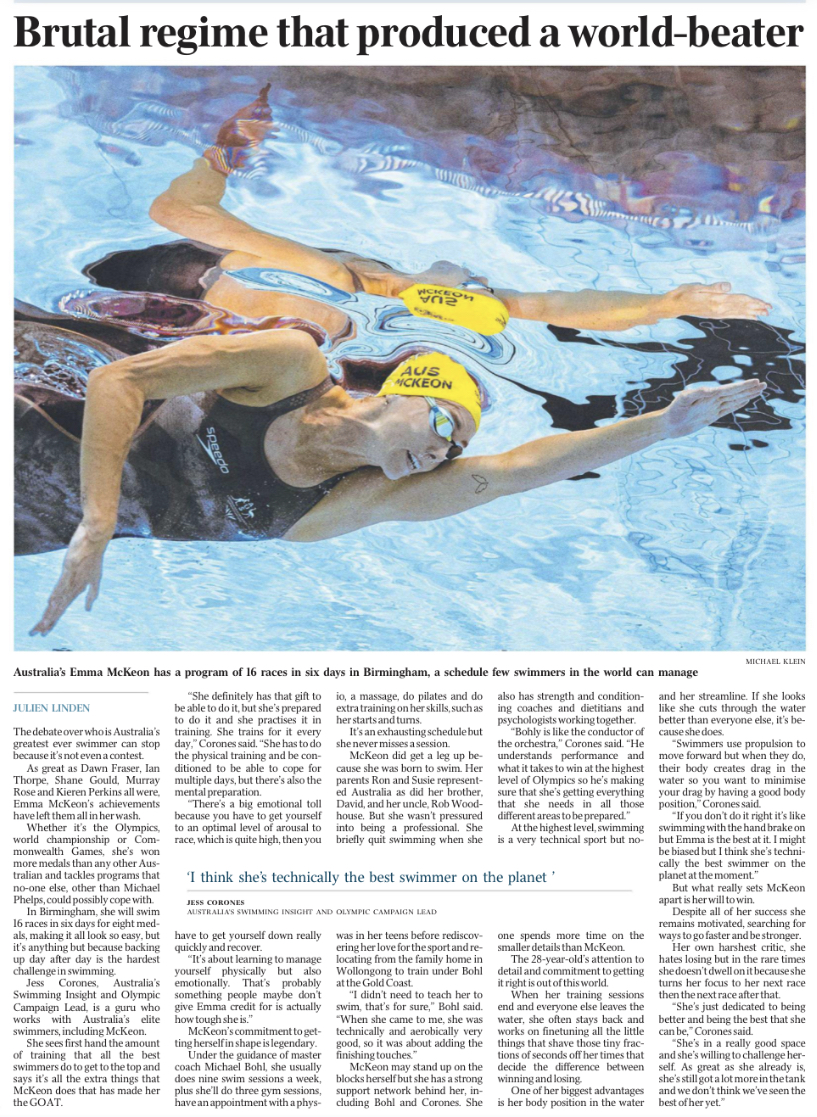 The debate over who is Australia’s greatest ever swimmer can stop because it’s not even a contest.

As great as Dawn Fraser, Ian Thorpe, Shane Gould, Murray Rose and Kieren Perkins all were, Emma McKeon’s achievements have left them all in her wash.

Whether it’s the Olympics, world championship or Commonwealth Games, she’s won more medals than any other Australian and tackles programs that no-one else, other than Michael Phelps, could possibly cope with.

In Birmingham, she will swim 16 races in six days for eight medals, making it all look so easy, but it’s anything but because backing up day after day is the hardest challenge in swimming.

Jess Corones, Australia’s Swimming Insight and Olympic Campaign Lead, is a guru who works with Australia’s elite ­swimmers, including McKeon.

She sees first hand the amount of training that all the best ­swimmers do to get to the top and says it’s all the extra things that McKeon does that has made her the GOAT.

“She definitely has that gift to be able to do it, but she’s prepared to do it and she practises it in training. She trains for it every day,” Corones said. “She has to do the physical training and be conditioned to be able to cope for multiple days, but there’s also the mental preparation.

“It’s about learning to manage yourself physically but also emotionally. That’s probably something people maybe don’t give Emma credit for is actually how tough she is.”

McKeon’s commitment to getting herself in shape is legendary.

Under the guidance of master coach Michael Bohl, she usually does nine swim sessions a week, plus she’ll do three gym sessions, have an appointment with a physio, a massage, do pilates and do extra training on her skills, such as her starts and turns.

It’s an exhausting schedule but she never misses a session.

McKeon did get a leg up because she was born to swim. Her parents Ron and Susie represented Australia as did her brother, David, and her uncle, Rob Woodhouse. But she wasn’t pressured into being a professional. She briefly quit swimming when she was in her teens before rediscovering her love for the sport and relocating from the family home in ­Wollongong to train under Bohl at the Gold Coast.

“I didn’t need to teach her to swim, that’s for sure,” Bohl said. “When she came to me, she was technically and aerobically very good, so it was about adding the finishing touches.”

McKeon may stand up on the blocks herself but she has a strong support network behind her, including Bohl and Corones. She also has strength and conditioning coaches and dietitians and psychologists working together.

“Bohly is like the conductor of the orchestra,” Corones said. “He understands performance and what it takes to win at the highest level of Olympics so he’s making sure that she’s getting everything that she needs in all those ­different areas to be prepared.”

At the highest level, swimming is a very technical sport but no-one spends more time on the smaller details than McKeon.

The 28-year-old’s attention to detail and commitment to getting it right is out of this world.

When her training sessions end and everyone else leaves the water, she often stays back and works on finetuning all the little things that shave those tiny fractions of seconds off her times that decide the difference between winning and losing.

One of her biggest advantages is her body position in the water and her streamline. If she looks like she cuts through the water better than everyone else, it’s because she does.

“Swimmers use propulsion to move forward but when they do, their body creates drag in the water so you want to minimise your drag by having a good body position,” Corones said.

“If you don’t do it right it’s like swimming with the hand brake on but Emma is the best at it. I might be biased but I think she’s technically the best swimmer on the planet at the moment.”

But what really sets McKeon apart is her will to win.

Despite all of her success she remains motivated, searching for ways to go faster and be stronger.

Her own harshest critic, she hates losing but in the rare times she doesn’t dwell on it because she turns her focus to her next race then the next race after that.

“She’s just dedicated to being better and being the best that she can be,” Corones said.

“She’s in a really good space and she’s willing to challenge herself. As great as she already is, she’s still got a lot more in the tank and we don’t think we’ve seen the best of her yet.”