Four years after she was told to stay at home because she wasn’t good enough to go to the Winter Olympics, Bree Walker has produced the best performance in history by any Australian bobsleigh driver.

Walker has reminded the selectors who snubbed her last time just what a massive blunder they made with a gutsy fightback that got her agonisingly close to snatching a medal in the inaugural women’s monobob at the Beijing Winter Olympics.

Reaching a top speed of 122km/h on the icy Chinese track nicknamed “the Dragon”, the fearless Walker showed that she’s up there with the best in the world as she stormed up the leaderboard to finish fifth — less than half a second from getting on the medal podium.

“All I can say is never count an Aussie out,” she said afterwards.

“I fought back today and the girls who were out there who were in front of me are the best pilots in the world.

“So to be fifth behind them at my first Olympics, I’m so chuffed. I’m so happy.”

A former hurdler, Walker met the official qualifying standards to compete in the two-woman bob event at the 2018 Winter Olympics in PyeongChang, but was not picked after selectors told her she was too inexperienced for the biggest stage in winter sport.

An automatic choice now after establishing herself as a star on the World Cup circuit, she looked right at home from the moment she arrived in Beijing, even though she struggled to get a clean run in the first two heats, held on Sunday.

Seventh at the halfway stage, she looked to have no chance of challenging for a medal, but posted the second-fastest time of all the finalists in each of Monday’s last two runs to surge into contention.

With all four times added together to decide the final rankings, she was unable to bridge the gap to the top three, but still made it into the top five — easily the best result ever by an Australian in bobsleigh at the Olympics.

“That’s what I wanted to be able to show people back at home and then even people around the world, that if you want something bad enough, you’ve just got to go out there and make it happen,” she said.

“It’s hard, but it has all been worth it.

“It’s amazing. It’s all worth the hard work and effort.”

Inspired by her teammate Jaclyn Narracott, who won a silver medal for Australia in skeleton on Sunday, Walker hasn’t given up hope of getting a medal herself when she competes in the two-woman bobsleigh on Friday and Saturday.

“I wanted to be standing here at these Olympics, representing Australia being a competitor, not just a participant,” she said.

“And I think I’ve kept that promise to myself. I’m over the moon.” 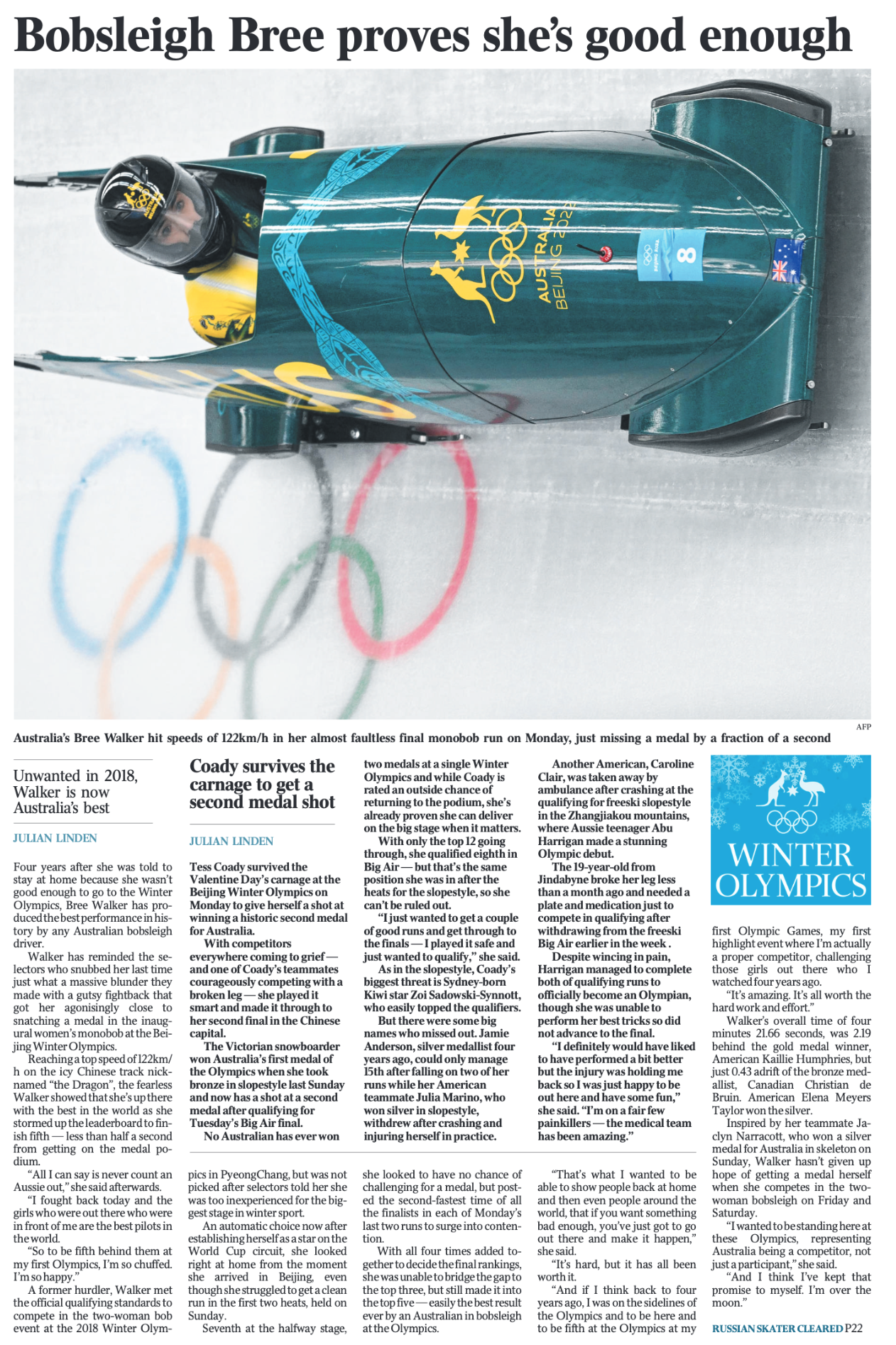