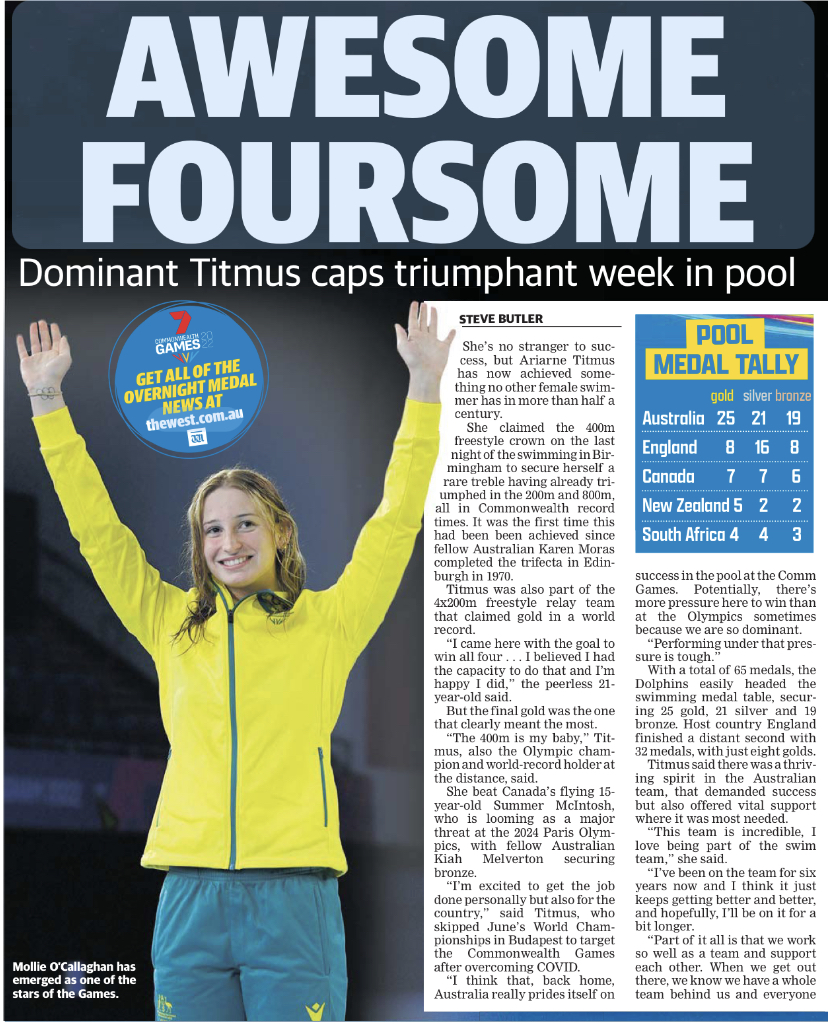 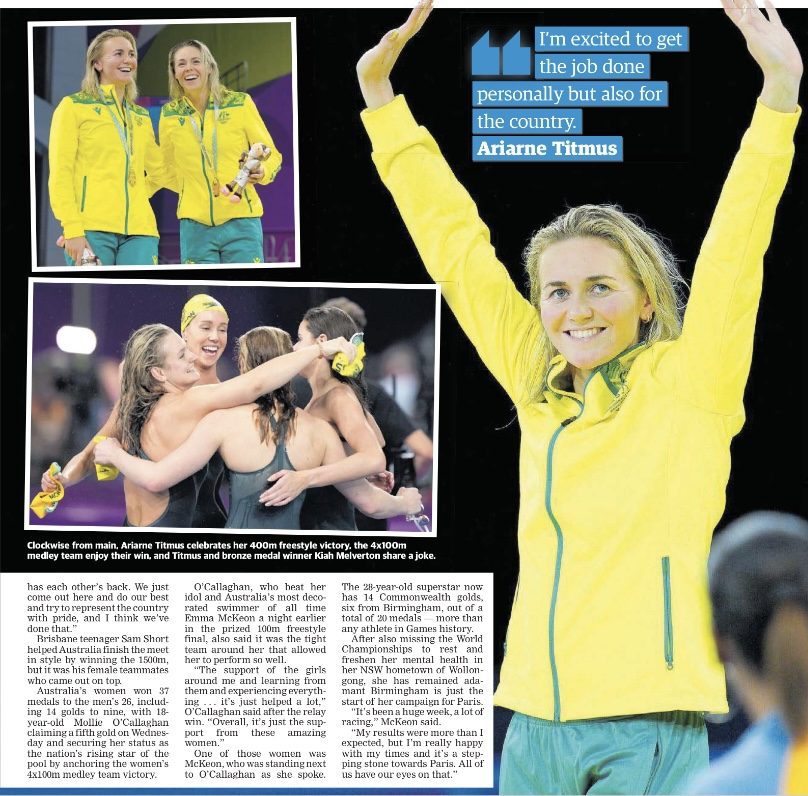 Dominant Titmus caps triumphant week in pool She’s no stranger to success , but Ariarne Titmus has now achieved something no other female swimhas in more than half a century .

She claimed the 400m freestyle crown on the last night of the swimming in Birmingham to secure herself a rare treble having already triumphed in the 200m and 800m, all in Commonwealth record times. It was the first time this had been been achieved since fellow Australian Karen Moras completed the trifecta in Edinburgh in 1970.

Titmus was also part of the 4x200m freestyle relay team that claimed gold in a world record. “I came here with the goal to win all four . . . I believed I had the capacity to do that and I’m happy I did,” the peerless 21-year-old said.

But the final gold was the one that clearly meant the most. “The 400m is my baby,” Titmus , also the Olympic champion and world-record holder at the distance , said. She beat Canada’s flying 15-year-old Summer McIntosh, who is looming as a major threat at the 2024 Paris Olympics , with fellow Australian Kiah Melverton securing bronze.

“I’m excited to get the job done personally but also for the country,” said Titmus, who skipped June’s World Championships in Budapest to target the Commonwealth Games after overcoming COVID. “I think that, back home, Australia really prides itself on success in the pool at the Comm Games.

Potentially, there’s more pressure here to win than at the Olympics sometimes because we are so dominant. “Performing under that pressure is tough.”

Titmus said there was a thriving spirit in the Australian team, that demanded success but also offered vital support where it was most needed. “This team is incredible, I love being part of the swim team,” she said.

“I’ve been on the team for six years now and I think it just keeps getting better and better, and hopefully, I’ll be on it for a bit longer. “Part of it all is that we work so well as a team and support each other.

When we get out there, we know we have a whole team behind us and everyone has each other’s back. We just come out here and do our best and try to represent the country with pride, and I think we’ve done that.”

Brisbane teenager Sam Short helped Australia finish the meet in style by winning the 1500m, but it was his female teammates who came out on top.

Australia’s women won 37 medals to the men’s 26, including 14 golds to nine, with 18-year-old Mollie O’Callaghan claiming a fifth gold on Wednesday and securing her status as the nation’s rising star of the pool by anchoring the women’s 4x100m medley team victory.

O’Callaghan , who beat her idol and Australia’s most decorated swimmer of all time Emma McKeon a night earlier in the prized 100m freestyle final, also said it was the tight team around her that allowed her to perform so well.

“The support of the girls around me and learning from them and experiencing everything . . . it’s just helped a lot,” O’Callaghan said after the relay win. “Overall, it’s just the support from these amazing women.”

One of those women was McKeon, who was standing next to O’Callaghan as she spoke.

The 28-year-old superstar now has 14 Commonwealth golds, six from Birmingham, out of a total of 20 medals — more than any athlete in Games history.

After also missing the World Championships to rest and freshen her mental health in her NSW hometown of Wollongong , she has remained adamant Birmingham is just the start of her campaign for Paris.

“It’s been a huge week, a lot of racing,” McKeon said. “My results were more than I expected, but I’m really happy with my times and it’s a stepping stone towards Paris. All of us have our eyes on that.”