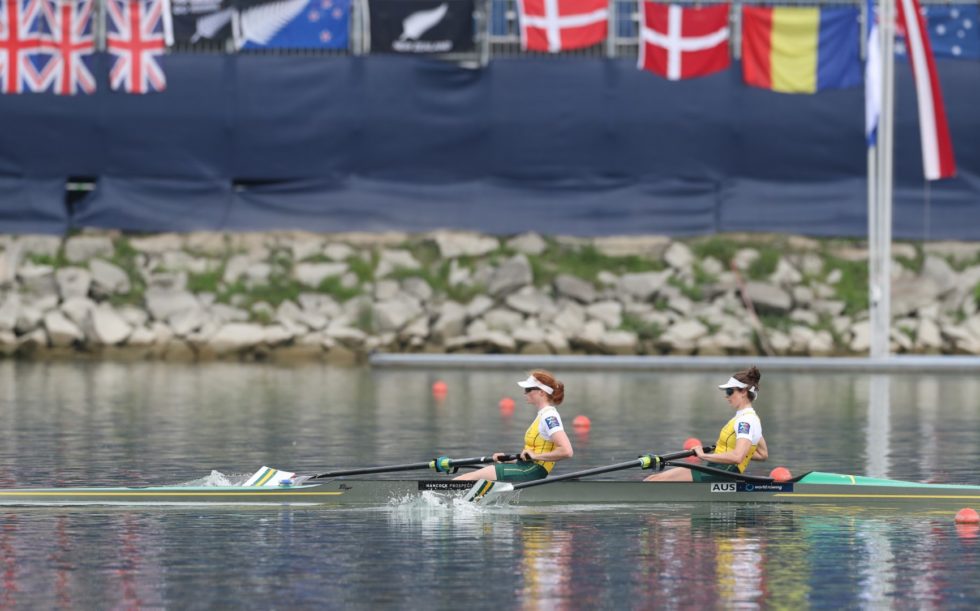 Further opportunities to qualify for Tokyo to come

Australia’s Women’s Quadruple Scull, Lightweight Men’s and Women’s Double Sculls will all contest B-Finals on Saturday. The Quad will need to finish top two in the B-Final to qualify the boat for Tokyo, while the Lightweight Double Sculls need to win their respective B-Finals to secure berths for the 2020 Games.

The Women’s Pair were the first Australian crew to qualify for the Tokyo 2020 Olympic Games, with Annabelle McIntyre and Jessica Morrison continuing their strong form in the boat class. The duo, who have not lost a race at this World Championships, won their semi-final in a time of 6 minutes 58 seconds.

The Pair then went on to double up and race the Women’s Eight in their afternoon repechage, with the crew finishing in second and booking a place in Sunday’s A-Final. Morrison, who represented Australia at the 2016 Rio Olympic Games in the Women’s Eight, was delighted to see the Pair qualified and the Eight a move step closer.

“It was a really special race, we obviously didn’t qualify the Women’s Pair four years ago, so to kick it off was really nice. The whole sweep program has been doing really well and we’ve taken a lot of confidence from each other and have gained momentum throughout the season with our strong racing.

“It would be a really special for us to qualify the Women’s Eight this weekend. It would be very symbolic of how we’ve developed the sweep program over the last four years and show how far we’ve come – it would be great to qualify all three women’s sweep boats for Tokyo,” said Morrison.

The Women’s Four of Lucy Stephan, Sarah Hawe, Katrina Werry and Olympia Aldersey led their semi-final from the start, to book themselves a third consecutive A-Final in the newest Olympic boat class. The A-Final will see the Australians attempt to regain the World Championships title they won in 2017.

Sarah Hawe said, “We are very happy to have qualified the Women’s Four for Tokyo. I’ve been in the Four for the last three years so it’s the culmination of three years of work that has now paid off. We went out there to execute our race plan to the best of our ability, trusting what we know works for us. Our next task moving forward is to improve on the semi to have our best race yet in the A-Final.”

The PR3 Mixed Coxed Four of James Talbot, Ben Gibson, Alex Vuillermin, Alexandra Viney and coxswain Renae Domaschenz needed a top three finish in their semi-final to progress to the A-Final and secure a spot for Australia at the 2020 Paralympic Games.

Australia were drawn next to reigning World Champions, Great Britain, who came out fastest and took the early lead. Australia sat back in fourth at the 500 metre mark, but at the halfway point, Australia upped their rating and made their move on the race pack, to secure second place, while Israel took third.

Coxswain of the PR3 Mixed Coxed Four, Renae Domaschenz, said, “Today was about qualifying the boat for Tokyo and making sure we were in the A-Final. We knew that Great Britain were going to be the fastest crew out there, so we made sure we were in the mix to qualify and progress.

“We’re delighted the boat is now qualified for Tokyo, it’s now about refocussing for the A-Final on Saturday and getting the best possible result for Australia.”

Australia’s Men’s Four of Alexander Hill, Jack Hargreaves, Nick Purnell and Jack O’Brien, were sat back in third at the 500 metre mark, but the Australians made their move on race leaders Poland and Germany to pass the opposition and cross the line in a time of 5 minutes 44 seconds, the fastest qualifying time of either semi-final. Australia will be looking to win its third consecutive World Championships title in the boat class on Saturday.

Hamish Playfair, Campbell Watts, Cameron Girdlestone and David Watts ensured Australia would have a Men’s Quadruple Scull at the 2020 Tokyo Olympic Games after they finished in third place in their A/B semi-final. Taking on the reigning World Champions, Italy, the Australians along with Poland and Italy broke away from the pack at the halfway mark. As the crews approached the finish line, Italy sprinted to take the win, with Poland in second and Australia rounding off the trio progressing to the A-Final.

The Lightweight Men’s Double Scull fired out of the start in their A/B semi-final and were in the lead for the middle kilometre of their race. However, Hamish Parry and Leon Chambers dropped back to fifth in the final quarter of the race and will now contest the B-Final. Georgia Nesbitt and Sarah Pound were drawn in Lane 6 of their semi-final of the Lightweight Women’s Double Sculls. The Australians crossed the line in sixth place, while the reigning World Champions New Zealand took the win followed by Belarus and France.

The Women’s Quadruple Scull were sixth in their A/B Semi-Final, with the reigning World Champions, Poland, along with Great Britain, being the only two to progress from the repechage. Cara Grzeskowiak, Fiona Ewing, Katrina Bateman and Rowena Meredith will require a top two finish in their B-Final to secure Australia a spot in Tokyo.

In the non-Olympic boat classes, Sean Murphy continued his good form in the Lightweight Men’s Single Scull. The U23 World Championships bronze medallist, finished second in his semi-final to book a place in his first Senior World Rowing Championships A-Final tomorrow. Meanwhile, Alice Arch, racing the Lightweight Women’s Single Scull, finished fourth in her semi-final, after a sprint for the line with Norway’s Mathilde Persson. The Australian will now contest the B-Final on Friday..

Australia will be racing in the following semi-finals and finals on Friday 30 August: