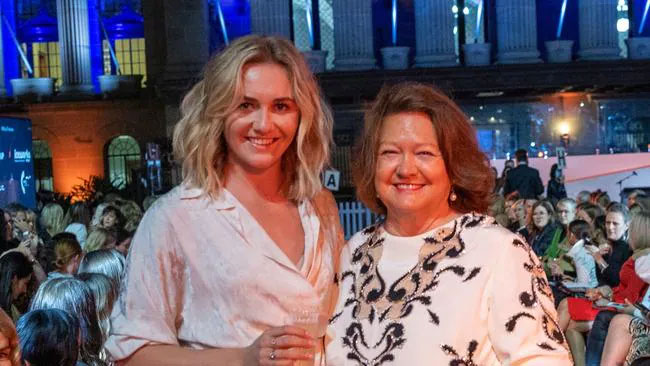 Gina Rinehart, right, with swimming champion Ariarne Titmus. Mrs Rinehart has received an Officer of the Order of Australia award.

Article by John Stensholt courtesy of the Australian.

Billionaire Gina Rinehart, 67, is enjoying the best of times in business, as her Hancock Prospecting goes from strength to strength.

Mrs Rinehart’s success with the mining and investment company she has grown from an operation reliant on royalty income when her father Lang Hancock died in 1992 to a huge concern today has been startling.

Hancock in 2021 made a huge $7.3bn profit, one of the biggest results for a private company in Australian corporate history, on the back of booming iron ore prices and a strong performance by the company’s mining investments and agricultural assets.

Last year was also a significant one away from mining for Mrs Rinehart, who watched strong performances by athletes in the four sports she backs at the Tokyo Olympic Games.

All of the support has been recognised in this year’s Australia Day honours, with Mrs Rinehart gaining the title of Officer of the Order of Australia for distinguished service to the mining sector, to the community through philanthropic initiatives, and to sport as a patron.

Hancock is one of the biggest taxpayers in Australia and has weathered the Covid pandemic. Its company profit for the year to June came after revenue for Mrs Rinehart’s Hancock rose to a record $16.6bn from $10.5bn a year earlier and the business paid a huge $2.7bn in federal corporate and state taxes.

The biggest asset in Hancock’s portfolio is the huge Roy Hill iron ore mine, although the company also owns an extensive cattle station business through Kidman & Co, and 29,000 head of Wagyu cattle.

Rinehart has had a stunningly successful decade, including clinching a complex $US7.2bn ($10bn) debt funding package for Roy Hill that has already been paid off.

Roy Hill represents Mrs Rinehart’s long-cherished dream of her family owning and operating its own mine, but there is more to come.

Documents released in January show plans for a new 20 million tonnes per year iron ore mine at Mulga Downs, on her pastoral property in Western Australia, to be in the market by 2025.