Age-old answer to shortages | Push for change is growing

Article by Rourke Walsh courtesy of the West Australian.
Older Australians should be able to work longer hours without it affecting their eligibility for the age pension, a seniors group says.
National Seniors chief advocate Ian Henschke said with the nation facing a critical workforce shortage, the two main political parties should take a policy to the 2022 Federal election that exempted employment income from the income test for pensioners with limited means.
“In New Zealand workforce participation among pensioners is a whopping 25 per cent. Here it is less than 3 per cent,” Mr Henschke told The Australian newspaper.
“Part of the reason for this disparity is that Kiwis don’t lose their pension when they work, they simply pay tax.” Mr Henschke said the system in Australia made it financially pointless to work more than one day a week.
“If you earn more than $240 a week, you lose 50 in the dollar,” he said. “That means a single pensioner can only earn $7800 a year before they start losing their pension.
“And if they earn more than $32,000, including the pension, then they pay tax as well. There are almost four million retirees of which 2.6 million receive the pension. If just 5 per cent more chose to work, that would be an army of 130,000 additional workers.” Mr Henschke’s comments come after mining billionaire Gina Rinehart, pictured, in November said her company Hancock Prospecting supported similar changes to help ease the nation’s skill crisis.
“Hancock recognises the shortage of staff Australia-wide disrupts many projects and delays supplies,” Mrs Rinehart said.
“We are a supporter of the Government changing its policy where pension arrangements are concerned, so that pensioners can work should they so choose, without onerous tax resulting from their decision to work. Hancock is a very patriotic company that supports investment in Australia, primary industries and jobs in WA and Australia. When mining does well, Australia does well.” Australia is ranked 18 among 37 OECD countries for labour force participation of people aged 55 to 64 and is below average for people aged 65 or more. The Australian Chamber of Commerce and Industry told The Australian there was “an army of older workers, ready and willing to return to the work place” but that the Government must raise the income threshold to make it worth while for them. 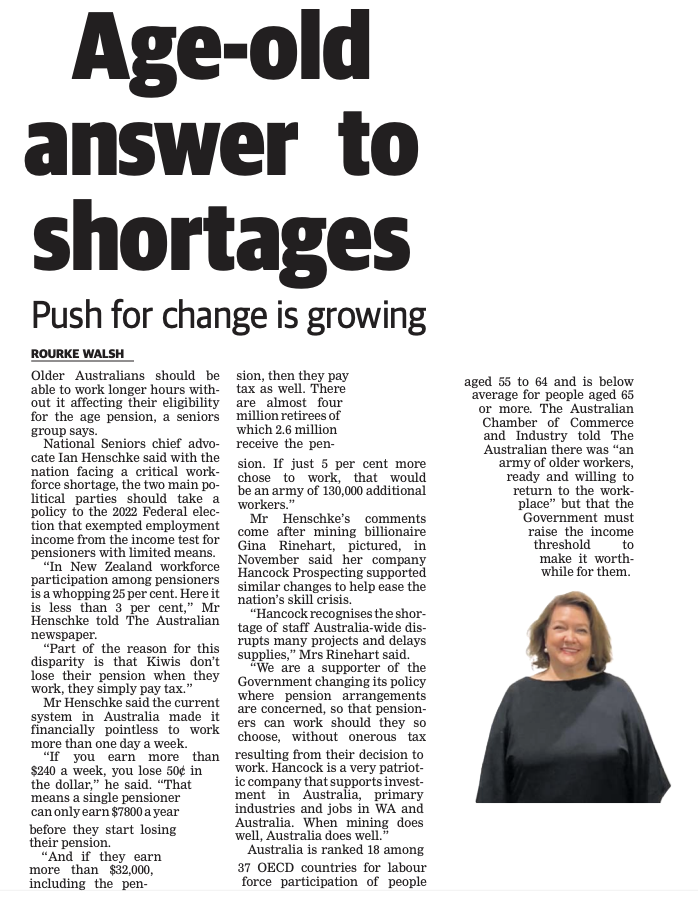