Unshakeable trust has served beach volleyball pair well, WHAT do you need to win an Olympic gold medal? “Just each other.”

In the ultimate mic drop, Taliqua Clancy revealed the secret that has catapulted our beach volleyball girls into Friday’s gold medal final against the US. Belief and trust.

The win puts Mariafe Artacho del Solar and Clancy on the cusp of securing Australia’s first Olympic gold medal in beach volleyball since 2000. But to put their names alongside Nat Cook and Kerri Pottharst – their mentors – they will first have to overcome powerhouse American combination April Ross and Alix Klineman.

Ross is aiming to claim her third Olympics medal in a row after silver in London and bronze in Rio. Klineman is a first-time Olympian and the pair has not dropped a set at these Games.

None of this matters to Clancy and Artacho del Solar, who will stay patient and on point with their mantra of being strong as a team. Artacho del Solar said: “It feels so surreal … dreamt of this moment for so many years and we are one step away from the result .”

Clancy’s journey started with Cathy Freeman’s stunning win in the 400m in Sydney, Artacho del Solar’s started with a signed postcard from Cook and Pottharst as a kid. Artacho del Solar said: “We want to inspire the next generation to take up beach volleyball and we are just so grateful to everyone that has supported us.

“The postcard, which was my sister’s , said go for gold and follow your dreams and that lit a fire in me … I want to be on the podium and I want to be a gold medallist.”

Clancy, a proud Wulli Wulli woman from Kingaroy who paints her nails in Indigenous colours, said it was just great to represent her people. “To show them that anything is possible … I never used to think about it as an athlete but now, I have been able to give back to my community and I see the impact.

“I am so proud of who I am and I want my people to feel the same way.” The pair said they were ready to take on a US side that had steamrolled its way into the final. But the pair would be hoping for a less nervous start, after allowing Latvia to niggle away at them in their semi.

Clancy has blossomed in the past two games and become a fortress at the net and, at times, unplayable on her serves. Standing 1.84m, Clancy was regularly serving at 69km/h – easily 10km/h faster than anyone else on the court.

With a knack for getting elevated at exactly the right time, Clancy got Australia back in the game with a big defensive block to make it 12-11 in the second.

It followed her serving ace to steal the first set 23-21 . But switching at the back, Artacho de Solar was the steadiest defensive player on the court on Thursday.

It’s a deadly combination that will deliver Australia’s first beach volleyball medal in 21 years – we just don’t know what colour. Heat will again be a factor. 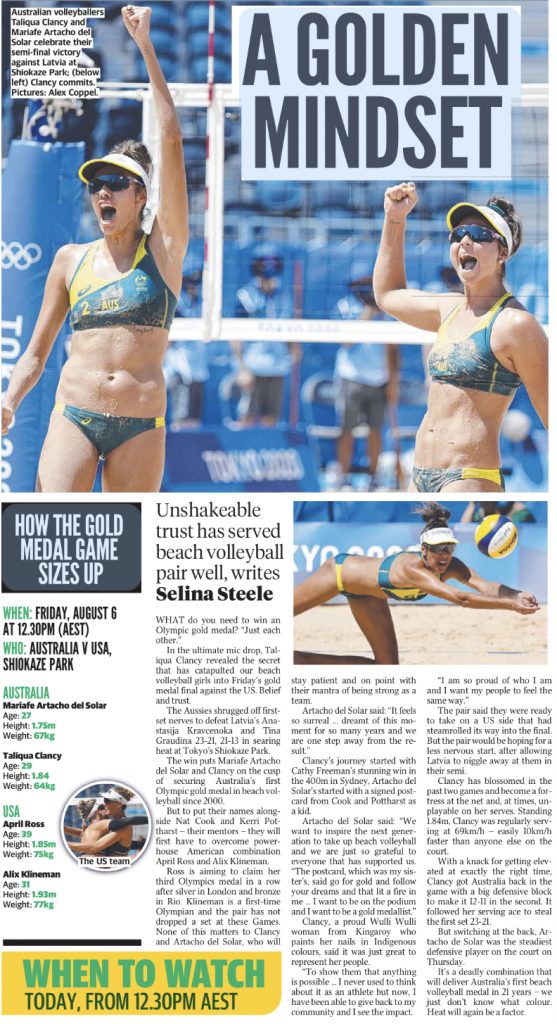