Editorial courtesy of the West Australian. 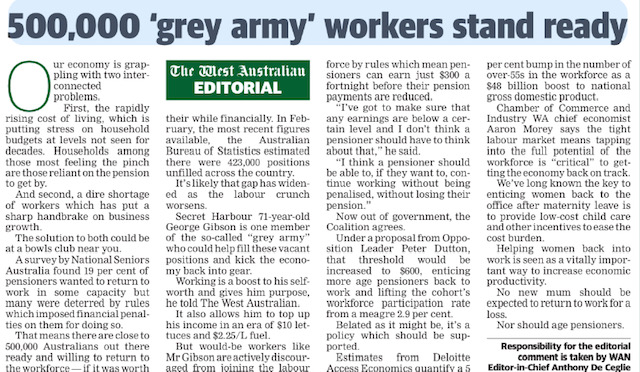 Our economy is grappling with two interconnected problems.

First, the rapidly rising cost of living which is putting stress on household budgets at levels not seen for decades.

Households among those most feeling the pinch are those reliant on the pension to get by.

And second, a dire shortage of workers which has put a sharp handbrake on business growth.

The solution to both could be at a bowls club near you.

A survey by National Seniors Australia found 19 per cent of pensioners wanted to return to work in some capacity, but many were deterred by rules which impose financial penalties upon them for doing so.

That means there are close to 500,000 Australians out there ready and willing to return to the workforce — if it were worth their while financially.

In February, the most recent figures available, the Australian Bureau of Statistics estimated there were 423,000 positions unfilled across the country.

It’s likely that gap has widened as the labour crunch worsens.

Secret Harbour 71-year-old George Gibson is one member of the so called “grey army” who could help fill these vacant positions and kick the economy back into gear.

Working is a boost to his self-worth and gives him purpose, he told The West Australian.

But would-be workers like Mr Gibson are actively discouraged from joining the labour force by rules which mean pensioners can earn just $300 per fortnight before their pension payments are reduced.

“I’ve got to make sure that any earnings are below a certain level and I don’t think a pensioner should have to think about that,” he said.

“I think a pensioner should be should be able to, if they want to, continue working without being penalised without losing their pension.”

Now out of government, the Coalition agrees.

Under a proposal from Opposition Leader Peter Dutton, that threshold would be increased to $600, enticing more old age pensioners back to work and lifting the cohort’s workforce participation rate from a meagre 2.9 per cent.

Estimates from Deloitte Access Economics quantify a 5 per cent bump in the number of 55s in the workforce as a $48 billion boost to national gross domestic product.

Chamber of Commerce and Industry WA chief economist Aaron Morey says the tight labour market means tapping into the full potential of the workforce was “critical” to getting the economy back on track.

We’ve long known the key to enticing women back to the office after maternity leave is to provide low cost childcare and other incentives to ease the cost burden.

Helping women back into work is seen as a vitally important way to increase economic productivity.

No new mum should be expected to return to work for a loss. Nor should old-age pensioners.

Responsibility for the editorial comment is taken by WAN Editor-in-Chief Anthony De Ceglie.